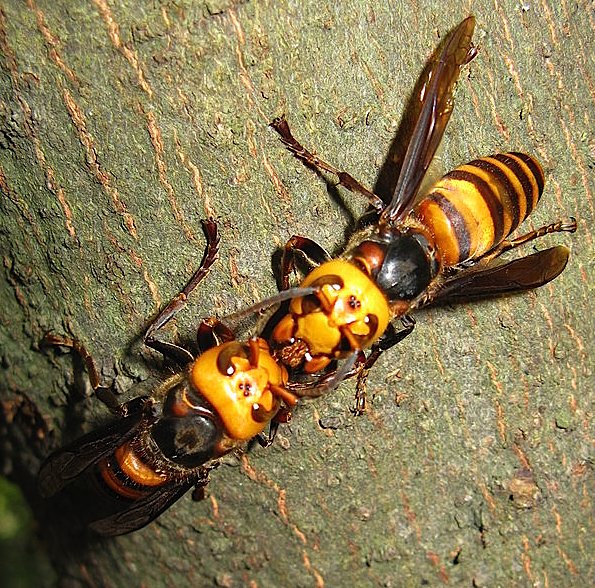 UPDATE: Since many people have sent us comments and e-mails regarding Asian Giant Hornets, we’ve created a Facebook page to help track sightings, and report experiences with Asian Giant Hornets or other bees, wasps, and hornets. If you’re interested, please LIKE Facebook.com/AsianGiantHornet.

Wasps, hornets and bees are in the news this summer. Last week bees swarmed Des Plaines Fire Department firefighter/paramedics as they rescued a man with an ankle injury about 5:54 p.m. on July 25, 2012. The firefighter/paramedics and their patient were stung by the bees as the victim was rescued up an embankment near Golf Road and River Road.

Arlington Heights Park District has alerted park goers to be alert for Cicada Killer Wasps, especially in sandboxes. They are black with splashes of yellow and can grow to up to almost two inches. Females have a stinger, but are not aggressive unless disturbed. Males have aggressive territorial behavior, but do not have a stinger.

Sunday, an Asian Giant Hornet or Japanese Giant Hornet (Vespa mandarinia) was spotted at a residence west of St. Viator High School. The insect was at least two inches long and as thick as a human thumb. It had a wide orange-yellow head with large eyes, and distinct yellow-orange and brownish-black bands on its body — like a bee. The Asian Giant Hornet patrolled around a house in the front yard — occasionally hovering and landing on shrubbery. The Asian Giant Hornet studied a yellow-jacket nest that was recently destroyed with Raid wasp spray on the property. Yes, the giant hornets attack Yellow Jacket nests. 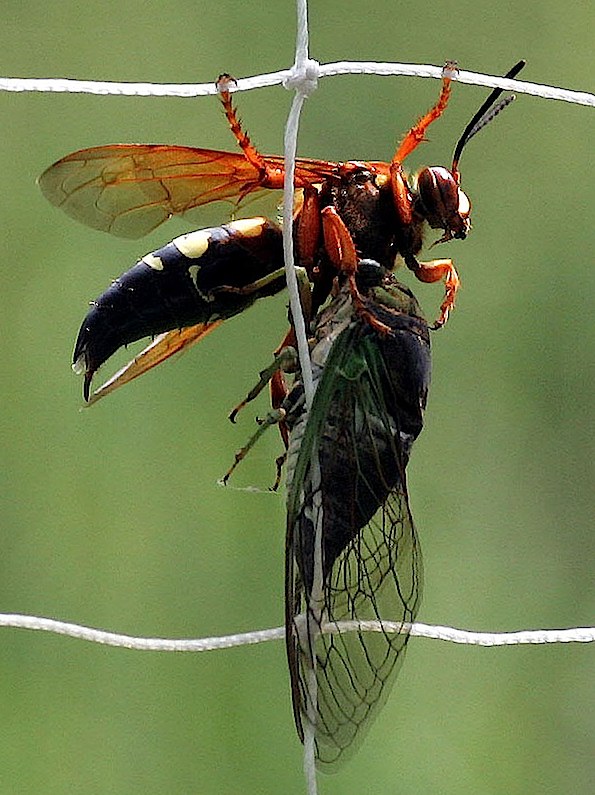 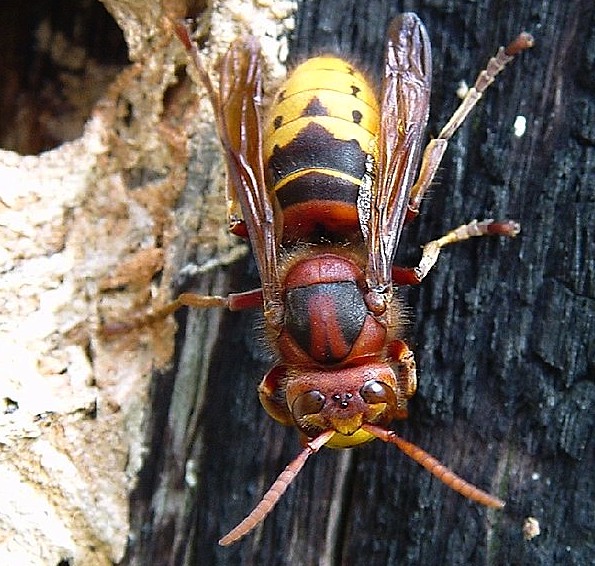 The European Hornet queen (Vespa crabro) is about one-to-two inches long — males and workers are smaller. The body segment is half brownish-black and half yellow, but its appearance is similar to the Asian Giant Hornet.

A large European Hornet filmed in Denmark. Notice how it moves backwards, and does not attack. The camera operator was at risk of attack, however. European Hornets are more likely to walk backwards and flee from humans, compared to Asian Giant Hornets, which will attack humans.

PAYBACK: Evolutionary adapted Japanese honeybees that have learned to defend their bee hive.

A forum on DSLReports.com Need to kill Asian Hornets and comments on a BadSpiderBites.com Giant Hornet article includes reports of Asian Giant Hornets in Alabama, California, Georgia, Illinois, Indiana, Iowa, Kentucky, Louisiana, New Hampshire, New Jersey, New York, North Carolina, Ohio, Oklahoma, Pennsylvania, Tennessee, Texas, Vermont, Virginia, and West Virginia. However, most or all of the sightings might be European Hornets. One of the pictures from a contributor from Tennessee shows a European Hornet. Last Fall posters reported aggressive infestations in recent years. In Georgia a poster reports he doesn’t go a day without seeing one of the giant hornets. One poster reports the insects flying into lights at night, and an infestation in a chimney with about 200 hornets getting inside the house. Many posters scoff at the comments that the insects aren’t aggressive. Some posters report that the large hornets are not affected by wasp/hornet spray.

I live in Richmond Virginia, & my parents live in King William Virginia. One day while visiting my folks, I was standing in their yard, talking to my mother with my arms crossed, when I heard what sounded like a rc airplane in a full on nosedive. I looked up just in time to see a humming bird sized hornet, identical to the picture of the Asian giant hornet, coming straight at me. It stung me on top of my ear & I have NEVER experienced such pain in my life, before, or since. The pain lasted for hours.

I am pierced & tattood all over, none of them hurt. This hurt. I cursed & cried like a little baby right in front of my mother. I am not allergic to bee or wasp stings, yet my entire face swelled up to extremely scary proportions. I have seen European hornets & cicada killers before. Nope, not it. Plus this thing was huge, & quite obviously, extremely aggressive, since I was doing NOTHING. Standing in the yard with my arms crossed. Not messing with a nest, not cutting grass, not doing jack. I have easily seen a dozen since that incident, & NO ONE will convince me they are not here. Yes it gets hot in VA, but NEVER over 100-105 degrees, so try again with the “It gets too hot here” B.S.. They ARE here.

In August 2009 tourists were warned to stay clear of Asian hornets that were colonizing in France. The insects are believed to have arrived in a shipment of pottery from China in 2004. One nest was discovered in 2004 and 2,000 were discovered in 2007. Nest have been reported in trees, in sewers and in the ground.

The previous warm Fall, warm Winter, and warm Spring have increased insect populations. Wasps and hornets have had more time to be active and to build their nests. Take extra caution looking for hornet nests and wasp nests on your property or whenever you are spending time outside. Wasps and hornets build nests in trees, in bushes, under eaves of homes, and in the ground — especially at the base of shrubs.