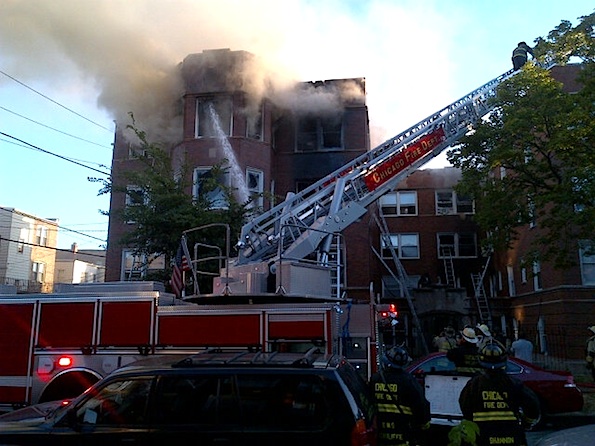 “Battalion 23 to Truck 42 we’ve got to think about that tower. 82 (Engine) and the truck (42) are gonna be eastbound. We got people hanging out of the windows on Sector 2 side. We’re throwin’ ladders on Sector 2” (Sector 2 is the left side when facing the front of the building. In the suburbs it’s called ‘B-side’)
— Battalion 23

Battalion 17 was RIT Chief and Truck 16 was the RIT truck. RIT is a rapid intervention team, which stands by with rescue equipment, especially for fire crews that run into trouble while working on the fire.

Battalion 21 was Plan Chief for the EMS Plan 1, which brings five paramedic ambulances to the scene. The EMS Plan 1 is a standard response at working apartment fires.

Squad 5 was the Chicago’s rescue squad on the scene. The dual rig unit goes to all working fires in Englewood and other south side neighborhoods with a utility truck and a snorkel truck.

The apartment building had heavy fire on the second, third, and fourth floors. The fire response was elevated to a 3-11 alarm fire.

The fire was under control at about