ACTIVE FIRES
Nearly half of the United States’ airborne fire suppression equipment was operating over Colorado on June 25, 2012, as tens of thousands of acres burned. Fires are active in southwestern Colorado, northeastern Colorado, and multiple locations in central Colorado. As of June 25, more than 2,000 people were fighting the High Park Fire and at least 257 homes were destroyed — making it the most destructive fire in Colorado history.

On June 27, 2012 the Air Force Academy issued a statement saying the military was preparing to dispatch up to 25 more helicopters to join the firefighting effort. Four half of the fleet of eight Air Force C-130 cargo planes equipped as air tankers have been dropping flame-retardant chemicals over the wildfire. The Waldo Canyon Fire threatens the Air Force Academy today bringing an evacuation order there. Yesterday the fire consumed about 9,000 acres in a matter of hours.

High Park Fire (InciWeb Fire Incident Map and Information)
The High Park Fire continued to burn west of Fort Collins. Started by lightning on June 9, 2012, this blaze had consumed 83,205 acres (33,672 hectares), making it the second-largest fire in Colorado history, second to the Hayman Fire that burned in 2002. At least 257 homes were destroyed in the High Park Fire. Good news is that the perimeter did not grow on Tuesday, June 26, 2012, and Wednesday is the first day in a week without a RED FLAG WARNING from the National Weather Service.

Little Sand Fire (InciWeb Fire Incident Map and Information)
The Little Sand Fire is located 13 miles northwest of Pagosa Springs, Colorado had been burning for weeks after being started by a lightning strike on May 13, 2012. As of June 25, the Little Sand Fire had burned 21,616 acres (8,748 hectares), was being fought by nearly 200 people, and was 31 percent contained.

Treasure Fire (InciWeb Fire Incident Map and Information)
The Treasure Fire is located 5 miles northeast of Leadville, Colorado in Birdseye Gulch. No structures are threatened and about 320 acres are involved, as of the June 27, 2012 report. Four full-size crews and one 10-person hand crews are working at the fire.

Waldo Canyon Fire (InciWeb Fire Incident Map and Information)
The Waldo Canyon Fire, just west of Colorado Springs, forced 11,000 people from their homes, many of them compelled to evacuate in the middle of the night on June 23–24. Today the evacuation figure has increased to 32,000 people. The fire started around noon on June 23, and by June 25 it had grown to 3,446 acres (1,395 hectares). InciWeb stated that 450 firefighters were battling the blaze, which retained the potential for rapid growth.

Weber Fire (InciWeb Fire Incident Map and Information)
The Weber Fire started about 4:15 p.m. on June 22. As of June 25, the Weber Fire had burned approximately 9,155 acres (3,400 hectares) and was being fought by 512 personnel. As of Wednesday about noon, the fire is considered 30% contained. Steep terrain (and the risk of rolling embers) is making direct firefighting tactics unsafe in some areas. Residents and visitors should expect to see and smell smoke over the next several days. If health issues are experienced, residents are advised to stay indoors. The Weber Fire is believed to be human-caused and is under investigation. 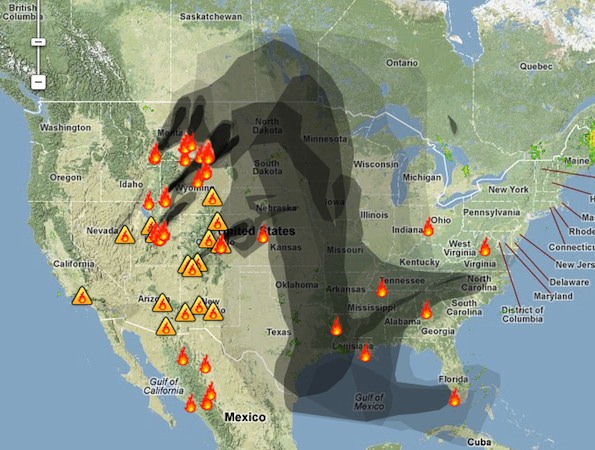 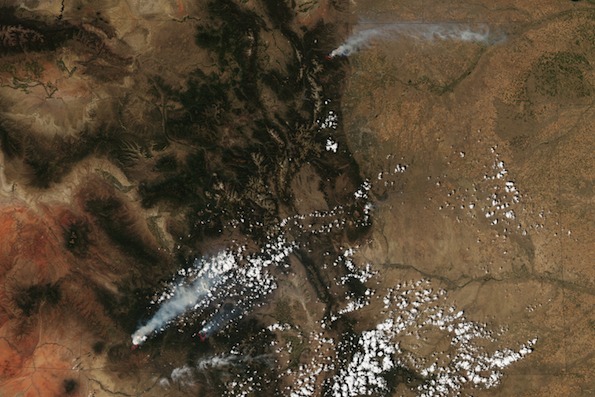 The smoke plume from the Colorado wildfires along with wildfires in Kansas, Missouri, Oklahoma, Arkansas, Texas, and Louisiana has covered Missouri and is reported to be entering western Illinois at about 10:30 a.m. CDT. Most of the State of Illinois is already scoring an air quality rating of USG — Unhealthy for Sensitive Groups (as of June 26, 2012). A USG rating from Illinois EPA means that there is an increased liklihood of respiratory symptoms and breathing discomfort in sensitive groups. Active children and adults, and people with respiratory disease, such as asthma, should limit prolonged outdoor activity. 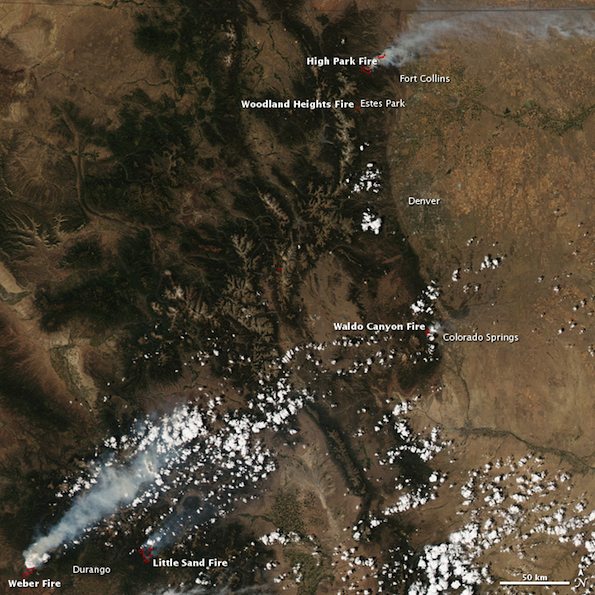 In terms of PM2.5, moderate and unhealthy levels for sensitive groups were read in several states. Moderate levels kept moderate during the entire day over Northeast, Mid-Atlantic and the Great Lakes regions

It is possible that some odor from the wildfire may be detected in Illinois in the next few days.