Major wireless service companies have agreed to disable cellphones after the phones are reported stolen under a strategy intended to deter the theft and resale of wireless devices.

Major cellphone carriers covering about 90 percent of U.S. phone subscribers are participating in a program that will involve a database that will record unique numbers or “IMEI numbers” of stolen phones and will block service to phones associated with reported stolen numbers. IMEI stand for International Mobile Equipment Identity to identify GSM, WCDMA, and iDEN mobile phones, as well as some satellite phones. The IMEI number is usually found printed inside the battery compartment of the phone.

Sprint already restricts voice, text and data use on a phone when a customer reports it stolen. Sprint said in a statement that the FCC’s industry-wide initiative is consistent with the company’s mission.

Officials hope the program will be operational in about six months in the United States and internationally in about 18 months.

Many phones, especially Apple iPhones are fenced and/or sold on eBay. Many end up overseas.

Proponents of the program hope to remove the inventive to steal cell phones. About 40 percent of robberies in New York City and Washington D.C. involve stolen cell phones.

Sen. Charles Schumer, D-N.Y., is also sponsoring legislation that would make it a federal crime to tamper with smartphones’ unique identifying numbers. Some experts say hackers might find a way to get around the unique number by creating another number for the stolen phone. Changing a phone’s IMEI number or possessing equipment that can change a phone’s IMEI is already a criminal offense in Great Britain and Latvia.

Also in the United Kingdom, a voluntary charter operated by the wireless phone networks ensures that any operator’s blacklisting of a handset is communicated to the Central Equipment Identity Register (CEIR) and subsequently to all other networks. Wireless phone will be unusable usually within 48 hours, as the new IMEI number also becomes blacklisted.

All United Kingdom police forces, including the Metropolitan Police Service, actively check IMEI numbers of wireless phones found at crime scenes. The IMEI is checked against the National Mobile Property Register (NMPR). The NMPR draws its information from many property databases, including Immobilise, which which allows optional (and free) registration of a variety of personal property items owned by citizens. Registration increases the likelihood that a device is returned to its rightful owner.

In Illinois, a similar system known as Law Enforcement Agencies Data System (LEADS) exists to store and retrieve information about stolen property. According to Illinois Integrated Justic Information System website, LEADS obtains information from all law enforcement agencies in Illinois. All participating agencies agree to enter records pertaining to stolen property, warrants, officer safety, and missing/runaway persons into LEADS (and NCIC where appropriate) as soon as sufficient information is available to establish a LEADS record. The accuracy and completeness of LEADS data is assured through a legal agreement, initial certification, training, and periodic audits. LEADS access is granted only to the Illinois criminal justice community. LEADS information is also exchanged with the federal government. A product’s serial number is commonly used to facilitate LEADS records. No information was available regarding the use of the IMEI number with LEADS records. 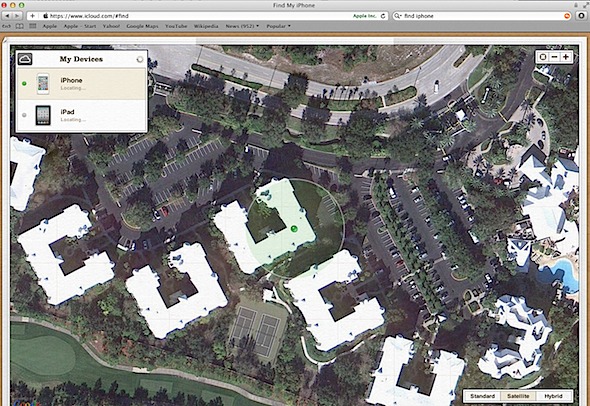 Green dot at center shows the location of an Apple iPhone in a hotel room at a resort in Florida.