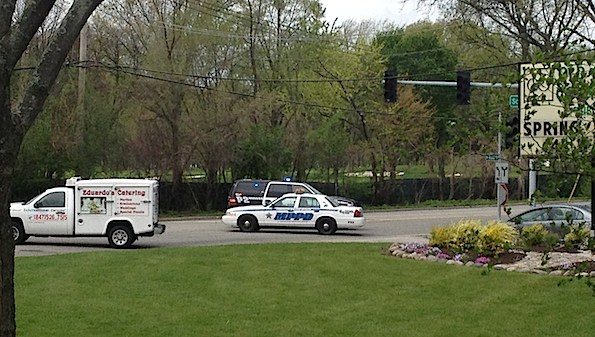 Winds brought a tree branch down on power lines, which closed Rand Road in both directions for over three hours from about 9:00 a.m. until 12:30 p.m. Route 12 was blocked between Euclid Avenue and Camp McDonald Road.

A tree branch fell and crashed through a windshield of a vehicle parked on East Canterbury in Arlington Heights Monday morning.

A downed power line down across Kenicott Avenue north of Dundee Road cut power to several businesses on the north side of Arlington Heights.

Across the northwest suburbs, several stops signs were blown down, a traffic light ripped from its standard, and several tree branches blocked roadways.

About 1:18 p.m. Monday police received a report that a light pole was blown down on two cars in the La Quinta parking lot at 1900 Oakton in Elk Grove Village.

Downed lines were a recurring problem in the roadway at Algonquin Road and Meacham Road between Schaumburg and Rolling Meadows. Lines were dragged off the road Monday morning, but were reported back on the roadway Monday afternoon.

The National Weather Service Forecast as of 7:00 p.m. Monday …
Tonight: Increasing clouds, with a low around 39. West northwest wind between 5 and 15 mph, with gusts as high as 20 mph.

Tuesday Night: Mostly clear, with a low around 42. Southeast wind around 5 mph.

Wednesday: A 20 percent chance of showers and thunderstorms after 1pm. Partly sunny, with a high near 69. Breezy, with a south southwest wind between 10 and 20 mph, with gusts as high as 30 mph.

Wednesday Night: A 30 percent chance of showers and thunderstorms, mainly before 1am. Mostly cloudy, with a low around 50. North northwest wind between 5 and 10 mph, with gusts as high as 15 mph. 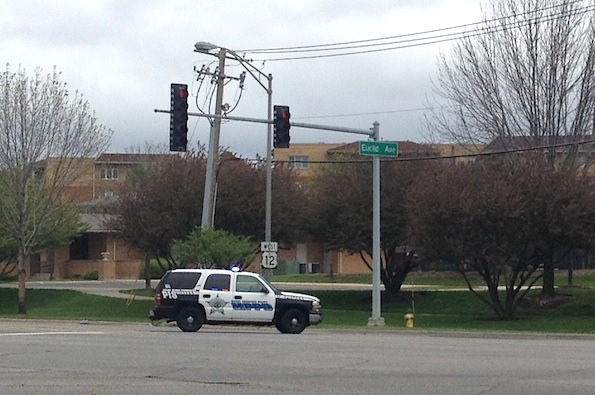