Production of new NBC pilot “Chicago Fire” at Franklin Street and Institute Place, Chicago during the weekend of March 24-25, 2012.

NBC Pilot ‘Chicago Fire’ filmed this weekend at Franklin Street and Institute Place in or near the River North Condo. The buzz about the pilot hit the streets late January 2012.

Casting information has been taking shape late Winter 2012 for the television pilot ‘Chicago Fire’ — an NBC pilot that focuses on the lives of the men and women working in the Chicago Fire Department. 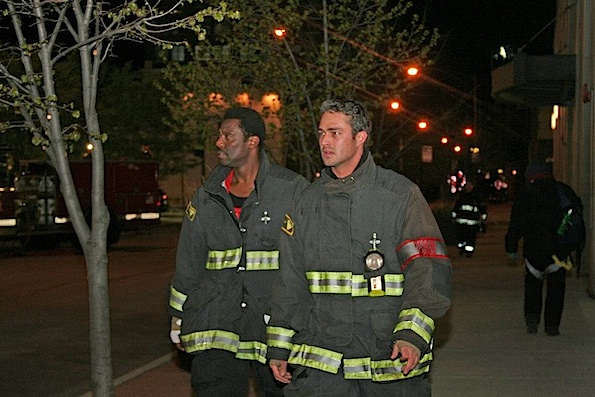 Eamonn Walker (of HBO’s Oz) was the first actor to be cast for Chicago Fire, will play Chief Walter Boden — a former Golden Gloves champ who has retirement on his mind. 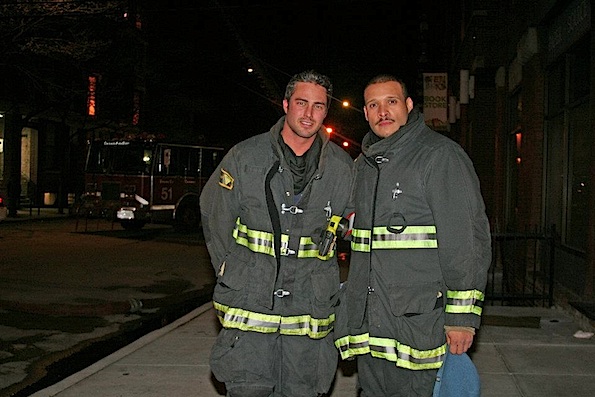 Taylor Kinney (previously on The Vampire Diaries) will play Squad Lieutenant Kelly Severide, a man with the drive to jump into the most dangerous situations — “adrenaline junkie.” Taylor Kinney is dating Lady Gaga, and the couple have been spotted in Chicago during past weeks.

Lauren German (current star in Hawaii Five-0 as Lori Weston) joined the cast of the NBC drama pilot Chicago Fire in early March. Her character will be Shay, a fearless EMT, who’s as comfortable with the guys in the firehouse as she is with the women.

Jesse Spencer (central character on House) will play Matthew Case — a natural leader, born to be a firefighter — who is assigned to Station 55. He is described as in his element working as a firefighter, but is struggling with the recent separation from his wife.

Monica Raymund (Law & Order SVU) will play a paramedic named Gabriella, who is described as quick, brave and dedicated.

David Eigenberg (Sex and the City star) will play a ‘luckless’ veteran firefighter who has lost his home due to foreclosure and is living with his in-laws.

Jeffrey Nachmanoff is directing the pilot from a script by Derek Haas and Michael Brandt.

According to the Chicago Film Office, the new pilot ‘Chicago Fire’ from Dick Wolf, who created Law and Order, is scheduled to shoot in Chicago between March 14 through April 1, 2012. Additional shooting for the series is anticipated for this summer if the series is given the green light.

Dick Wolf is a producer of crime stories, such as the television series Miami Vice (supervising producer) and NBC’s Law & Order, which he created. Plots of Law & Order were often based on real cases that recently made headlines (“Ripped from the Headlines”), and lasted for 20 seasons. Episodes were shot in New York City with emphasis on local characters, dialects, neighborhood customs, history and cityscapes. Early fans of ‘Chicago Fire’ hope that there will be a similar local flair showing Chicago neighborhoods and episodes based on actual fires and rescues.