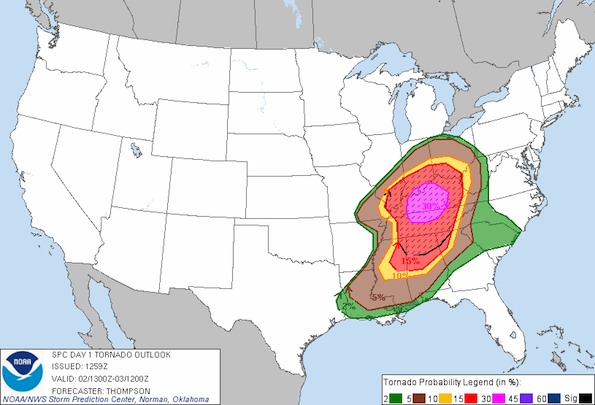 Extreme southern Indiana, central Kentucky and northern Tennessee are at the highest risk for tornados on Friday March 2, 2012, according the National Weather Service Storm Prediction Center.

Areas of southeast Illinois, where a tornado destroyed much of Harrisburg, Illinois is also at a high risk of severed thunderstorms and possibly a tornado.

Parts of the Midwest and South that have yet to pick up the pieces from yesterday’s deadly tornados are could get hit with another wallop March 2, 2012, and meteorologists say they’ll be “right in the bull’s eye.”

Rebuilding after storms is becoming a growth industry as the United States is slammed by more natural disasters, and leaders say the nation’s recovery network functions as well as it does because of “disaster junkies.”