VIDEO of Deer Grove wildfire from daylight to night on Saturday.

Firefighters were immediately protecting a storage facility as winds were pushing the fire east toward the south end of Grossinger Chevrolet property. Firefighters stopped the fire from reaching a storage facility on the south end of the Grossinger Chevrolet property. Winds at the time were southwest, steady at 24 mph with gusts to about 30 mph. Air temperature was about 54°and humidity was about 34%. The area was under a National Weather Service Red Flag Warning which warned that conditions of low humidity, high winds and warm temperatures would create “explosive fire growth potential” on Saturday, March 10, 2012 in most of Northern Illinois and Northwest Indiana. 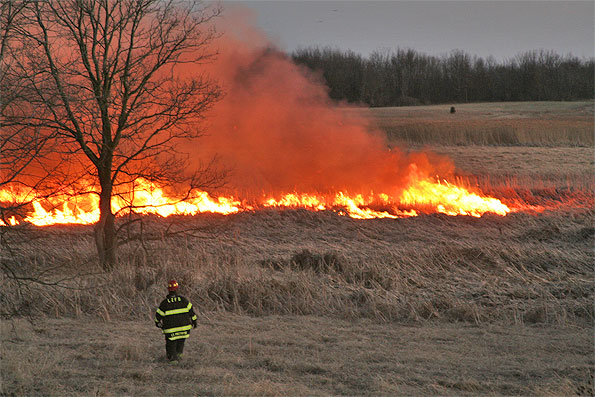 Firefighters assess the brush fire in the east side of the forest preserved during daylight.

Firefighters were concerned with exposures at Grossinger Chevrolet, the UPS facility on North Hicks Road and houses along Brentwood Drive, just west of Dee Lane. About 5:20 p.m. Palatine Fire Department responded with another engine. About 5:30 p.m. another Quint and an ambulance for standby were sent to the scene. The first forest preserve vehicle arrived about 5:39 p.m.

For the first hour the fire moved eastward, but after dark and with most of the fuel load spent (burnt prairie grass, brush and trees), the fire began to move west. Soggy conditions and marshland prevented larger brush trucks from entering the forest preserve property. About 5:45 p.m. the threat to Grossinger Chevrolet was eliminated and the fire seemed to diminish.

The Cook County Forest Preserve wildfire firefighters and other Cook County officials arrived just before 6:00 p.m. with all-terrain vehicles and wildfire firefighting equipment. Also just before 6:00 p.m. residents in the neighborhood just north of the forest preserve began to call 9-1-1 out of concern for the fire in the forest preserve. Palatine firefighters checked the residents view of the fire to confirm that the fire reported was the same fire as the fire they were already fighting.

About 6:15 p.m. a rescue squad from Palatine was dispatched for additional manpower. About 6:30 p.m. crowds of people started to gather as the fire started pickup and move west.

About 7:23 p.m. another Palatine fire engine was sent to the scene — specifically to protect the UPS facility as flames picked up moved east toward the UPS Customer Center and distribution facility, 2050 North Hicks Road in Palatine. Firefighters eventually fought the wildfire in the forest preserve from the west end of the UPS property. Meanwhile the fire flared up in the northeast area of the forest preserve — threatening Grossinger Chevrolet again. Air temperature at 7:45 p.m. was 47°F with a south-southwest wind at 20 mph and gusting to 35 mph. Humidity was 46% with a forecast increase to 60% at about 11:00 p.m. The winds were forecast to stay about the same intensity until about 10:00 p.m.

About 7:59 p.m. a Palatine tower ladder truck was sent to Brentwood and Irene to protect houses exposed to the wildfire that was now advancing considerably to the west of the original fire. 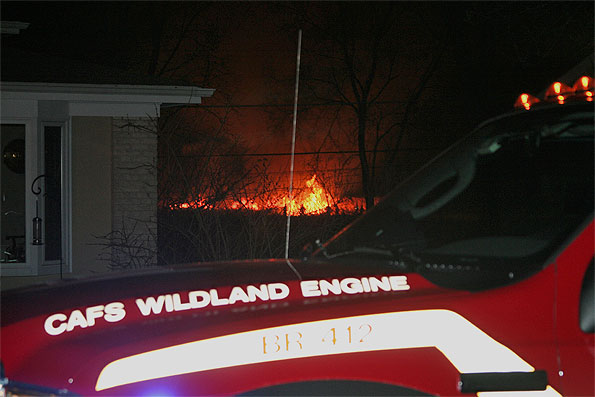 At about 8:28 p.m. Saturday a MABAS box alarm was requested for mutual aid assistance for additional firefighters and equipment as the wildfire ran parallel to Brentwood Drive. The westward advance of the fire in the forest preserve was stopped in alignment with about at the middle of Brentwood. The fire was mostly extinguished by about 9:24 p.m. The fire was reported under control at about 9:55 p.m. Saturday. The MABAS Box Alarm was struck out at about 10:04 p.m. Saturday. 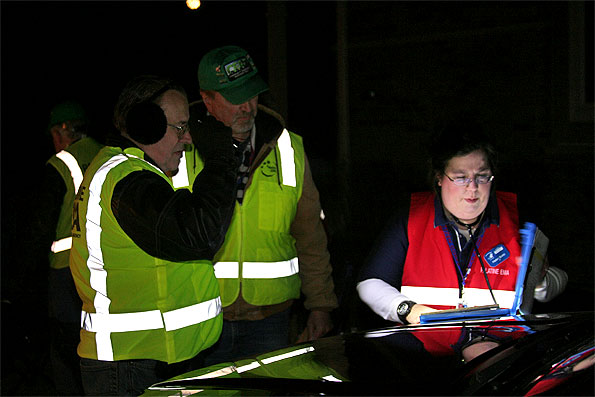 Rehab team coordinates tasks at the wildfire on Saturday night for firefighter health and safety checks.

One Cook County Wildland firefighter was seen by paramedics for possible exposure after his legs were soaked with water for a prolonged period in mid-50°F and mid-40°F temperatures. He was believed to have been transported to Northwest Community Hospital after 10:00 p.m., but this was not confirmed by officials.