UPDATE: Crash victim identities release …
William Didier (a 58-year-old pilot with 40 years experience) was reported dead at the scene. Also killed were John W. Bialek, 80, and his wife Ilomae Bialek, 75. John Bialek was being transported to the Chicago area for treatment of a medical issue when the aircraft that was transporting him crashed. The co-pilot and an paramedic on the flight are hospitalized at Level I Trauma Center Advocate Condell Medical Center in Libertyville.

Riverwoods police and Lincolnshire-Riverwoods firefighter/paramedics responded about 10:48 p.m. Monday to the 600 block of Portwine to a report of an aircraft into a building. The original aircraft report from Chicago Executive Airport was that a Piper Navajo crashed with an unknown number of people onboard. Two crash victims were dead at the scene. 1 died en route to the hospital. 2 are hospitalized.

The aircraft was also originally reported to have been a Lifeguard flight, which could have been a medical transport or an organ transplant transport. Some models of the Piper Navajo aircraft hold up to 11 people. Overnight it was learned that the plane carried two pilots, a paramedic, a male medical transport patient, and the patient’s wife.

Firefighters upon arrival at the scene reported a plane down at the rear of a house. Firefighters also originally reported four people in the aircraft with heavy fire.

Lincolnshire-Riverwoods Ambulance 52 reported at about 10:53 p.m., “668 Portwine — the rear of the house — I got a plane down. We do have a fire.” At least one report from a witness at the scene last night said that the crash was in a rear yard — not the house. Reports were later confirmed that the impact was about 50 feet to the rear of the house. 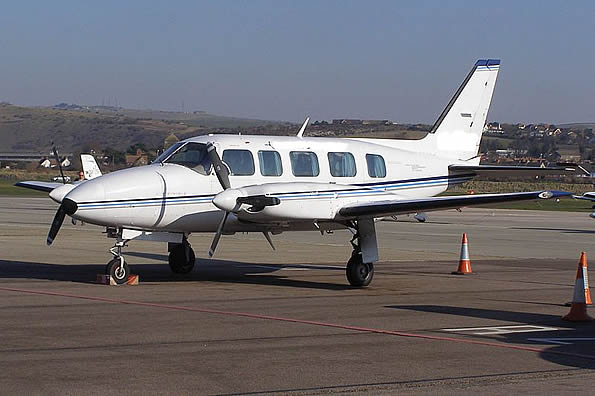 The area of the aircraft crash is a heavily wooded residential neighborhood about 2.7 miles from the northern border of Chicago Executive Airport.

Two crash victims dead at the scene were the pilot and the medical patient’s wife. The male medical transport patient died en route to the hospital.

No Lifeguard Flights matching a description for this aircraft were listed on Flightaware.com Monday night (flightaware.com/live/special/lifeguard/)

A flight from Jesup-Wayne County Airport lists a Piper Navajo aircraft on a flight that departed about 6:58 p.m. Monday. The aircraft’s last known heading, according to Flightaware.com (N59773 Flight Track Log), was Southeast (143°) with an air speed of 110 knotts (127 MPH). The aircraft was in communication with Chicago TRACON — the terminal radar approach control air traffic control facility from about 10:27 p.m., when it was transferred from Chicago Center air traffic facility.

The debris field was scattered about 200-300 yards southeast of the impact scene, according to Lincolnshire-Riverwoods Fire Protection District Fire Chief Fred Kruger.

The aircraft is reported to be owned by Trans North Air based out of Eagle River, Wisconsin; Green Bay, Wisconsin; Chicago, Illinois; and Charleston, South Carolina. According to their official website (transnorth.com) their Piper aircraft is a Piper Chieftain, and services include Air Transportation Service, Air Charter, Air Ambulance, Hazmat, and Chicago Shuttle. The company also is Department of Defense approved, according to Trans North Air website.