An unstable top-heavy/front heavy, older model television set is likely the cause of the death of Karl Clermont, who was found underneath the TV in his basement with severe head injuries just after 8:45 p.m. Sunday, October 30, 2011.

The older model television with the weight of a heavy glass tube at the front-facing part of the set, and inherent instability, is the likely cause of a fatal incident that Arlington Heights police define as ‘a tragic accident.’ Karl apparently reached to the top of the television or climbed on it, which caused the unstable television to fall on him. 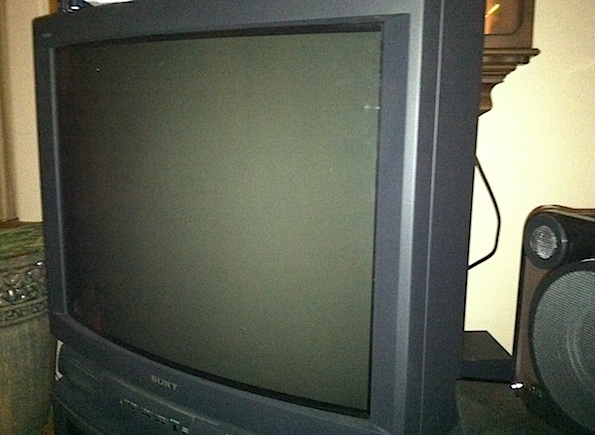 Older model tube television set that is likely similar to the type of TV that fell on Karl Clermont. Television sets with 32″ diagonal tube screens and larger weigh over 350 pounds. 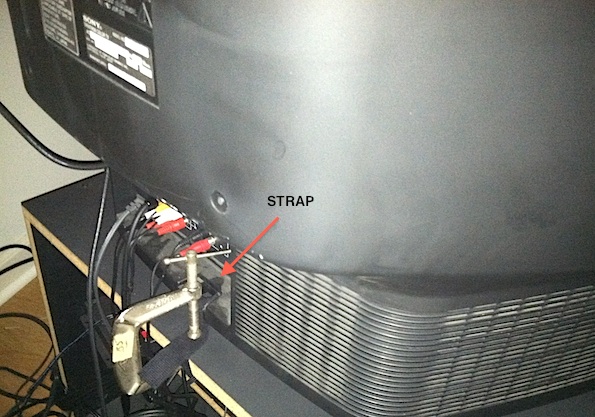 A Sony large tube television with a specially designed television stand with broken black strap buckle on the TV stand side — nylon webbing strap secured to the stand with a C-clamp.

A recent report released from the Consumer Product Safety Commission (CPSC) shows that from 2006 to 2010 children experience the most injuries from tipover incidents with televisions (estimated 13,700) and furniture (estimated 11,500 injuries). Adults and seniors experience the most injuries with furniture (estimated 9,300 and 1,800 injuries, respectively). Children had the highest rates annually for televisions, with 18 emergency department-treated injuries per 100,000 children, followed by furniture, with 15 emergency department-treated injuries per 100,000 children.

CPSC staff has received 293 reports of fatalities that occurred between 2000 and 2010, and that are related to appliance, furniture, or television instability. Of these 293 reported fatalities, 60 percent (176 deaths) involved televisions falling, with 71 of the 176 fatalities associated with televisions along with the furniture in/on which the television was resting falling as well.

The fatalities were separated into three distinct age categories: (1) children (younger than 18 years of age); (2) adults (18 years of age or older, but less than 60 years); and (3) seniors (60 years of age or older). Eighty-four percent (245 deaths) of these fatalities were children. This is followed by seniors with 12 percent (35 deaths); and the remaining victims were adults (4 percent; 13 deaths). Of the 245 child fatalities, 69 percent (169 deaths) involved falling televisions, and 27 percent (65 deaths) involved only furniture falling. Sixty-five percent (160 deaths) of the children were at least 1 year of age and less than 3 1⁄2 years of age.

Residential locations account for 74 percent (218 deaths) of the fatalities. Five percent occurred in public locations (15 deaths); and 20 percent (60 deaths) did not provide enough information to determine the location. Fatalities of children had a similar distribution by location (78 percent residential, 4 percent public, and 18 percent unknown).

Bedrooms had the largest number of product instability fatalities, with 40 percent (117 deaths), followed by the living/family room, with 18 percent (53 deaths). There is also a large portion of unknown locations (32 percent; 93 deaths) for this room-of-incident variable. Of the fatalities involving children (245 deaths), 46 percent occurred in bedrooms, and 21 percent happened in living/family rooms.

The head was the area of the body injured most frequently (55 percent head only; 4 percent head and torso; 1 percent head and limb(s)) in these reported fatalities; and this is followed by the torso (27 percent) only. Children had the most head injuries, compared to adults and seniors, who had more torso injuries.

Hazard Scenarios/Mechanism of Injury
In 34 percent (84 deaths) of the child fatalities, the victim or someone else was climbing on the furniture and/or television. This is followed by scenarios in which force was being applied to the furniture and/or television, such as hitting, pulling, or kicking (15 percent; 36 deaths). In 9 percent (21 deaths), the victim was involved in some activity near the product, such as playing nearby or adjusting the controls on a TV or electronic device connected to the TV.

Karl Clermont, 6, was pronounced dead at Northwest Community Hospital at 9:45 p.m. apparently after traumatic head injuries caused by an older model television set that fell on him.

Arlington Heights police and firefighter/paramedics responded about 8:47 p.m. Sunday to a report of a home accident with severe trauma in the 1700 block of Portsmith. Police and firefighter/paramedics received a report that a 6-year-old boy was injured when a television set fell on top of him. Police received information that the boy’s aunt carried the child out to the front yard. Other information reports that the aunt ran out to get help from neighbors. Then a neighbor lifted the television off Karl, and started CPR. Upon arrival paramedics immediately placed the boy in the ambulance and were en route to the hospital from the scene within seven minutes of the dispatch of the call for help. Karl Clermont was in apparent traumatic cardiac arrest when paramedics arrived on the scene. Paramedics were dispatched, were on scene and were en route to Northwest Community Hospital within seven minutes. Karl Clermont was transported with the life-threatening injuries while major intersections along Arlington Heights Road were cleared for the rushed ambulance transport.

The residence was marked off with police tape Sunday night. Arlington Heights police, who are investigating the case, have defined the incident as a tragic accident.