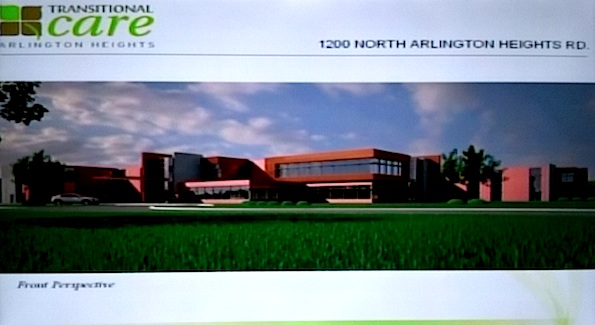 Transitional Care Management (TCM) officials Brian Cloch, Founder & CEO; Nick Peppers, attorney for TCM; and Mike Filippo, Executive Senior Vice President; and other representatives for TCM proposed the teardown of the AT&T building at 1200 North Arlington Heights, and the construction of an “innovative” transitional care, 75,000-square-foot, 120-bed facility. At Tuesday’s Village Board meeting,the business was seeking a change in zoning from office to institutional.

The Village Board approved the TCM proposal 7-0, including six “Yays” from board members and Mayor Arlene Mulder, and excluding trustees Thomas Glasgow and Bert Rosenberg. The meeting was extended past 11:00 p.m.

According to TCM’s website, medical directors guide around-the-clock skilled nursing care with physiatrists, therapists and clinicians, who work to restore function lost through injury, surgery or disease. The facility’s goal is to help patients reduce pain, hasten recovery and increase performance. Their target market are patients who require a short stay with rehabilitation. The facility would not have out-patient care. 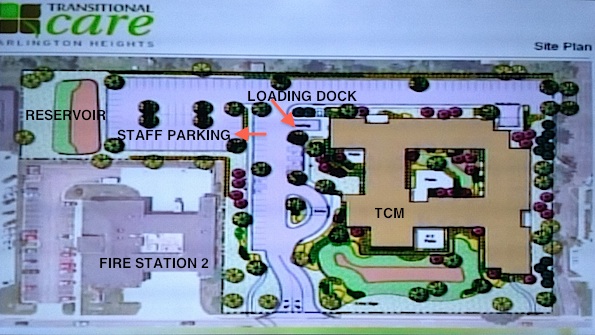 Plan drawing for TCM with arrow pointing toward “Staff Parking” as a possible lane change in the lot to keep employees from driving too close to the backyards of Dunton Avenue residents during late night and early morning hours.

Arlington Heights resident Richard Vossel called the facility a nursing home after hearing the proposal that differentiated TCM from a nursing home.

He claimed that there were not enough parking spaces for the number of visitors and employees that will park at the facility. He is concerned that traffic will flow to the path of least resistance, and flow out through the church lot and Dunton Avenue. Other residents also criticized the traffic that will confound school traffic, headlights and slamming car doors at all hours. A resident west of the facility criticized placement of the loading dock, which is too close to the backyards of residents that live on the east side of Dunton Avenue.

He claimed that the 24-hour operation of the facility would affect residential neighbors around the clock.

He also opposed local proximity to schools, which he said would be dismissed at the same time as the 7:00 a.m. and 3:00 p.m. shift changes for the facility. At least two residents of Luther Village also opposed the facility because it will cause a loss of the payer class of patients and cause financial harm to the Lutheran Home.

A spokesman for the Lutheran Home also opposed the plan because the new facility will compete and cause the loss of many of the profitable patients, who pay with private insurance, that currently go to the Lutheran Home.

“It's tempting to have Transitional Care real estate tax be a major consideration in your decision. Please keep in mind the fact that collectively, the residents of Luther Village pay approximately $3 million in real estate taxes.“

Michael Vick supported the plan, and pointed optimistically to the facility’s jobs that will be created for the community for both construction and operations, which will also bring increased business for local merchants.

Other proponents of the facility claimed they have had their own difficult experiences, have worked with patients, or have known friends or relatives that have had difficulty finding admission to an appropriate facility after discharge from the hospital.

Mike Filippo, Executive Senior Vice President for TCM, spoke on behalf of Dr. David Charmin, M.D. He relayed that, increasingly, hospitals release patients quicker and sicker. He says his patients do not want go to a long term nursing home, which is detrimental to patient outcome. He added, for Dr. Charmin, that a specialized facility that caters to short-term care is a welcome solution to the needs of patients.

Carl Bendorf pointed out that the village policy is obligated to mitigate detrimental effects on existing businesses. He also said that TCM is not needed in Arlington Heights because there are already four nursing homes.

Other critics opposed approval of the proposal because of the lack of need for beds in these type of facilities. The lack of any regulations to prevent the facility from keeping patients long term was claimed to be a point to oppose and discredit the short-term care innovation claim of the facility.

Mary Jo Zeller pointed out that the former Continued Care Center at Northwest Community Hospital was a transitional care center owned by the hospital on the hospital campus, and that it didn’t survive. Zeller is concerned that if the Continuing Care Center couldn’t survive, perhaps TCM would not survive either.

One critic of the proposal also pointed out that the facility’s lack of an out-patient care profit center would make it harder for TCM’s business model to be successful.

The Illinois Health Facilities Service and Review Board issued a certificate this summer saying the TCM project is needed, but a few opponents criticized the judgment.

Several conditions of operation were discussed, such as truck delivery times, including liquid oxygen truck deliveries. TCM stated they had control of when vendors would make deliveries. The ease of maneuverability of semi-trailer truck traffic and the beeping of ambulances moving in reverse were points brought up by Trustee John Scaletta.

Trustees Burt Rosenberg and Thomas Glasgow both recused themselves to avoid possible conflict of interest situations.