Video from LibertyPlazaRev uploaded Saturday, September 24, 2011 does not document the location, the date or the circumstances in the caption, but it is apparently near Unino Square.

A woman with a camera, elicits over-dramatic rants at NYPD officers while she videotapes police officers arresting people on a street corner in New York City. She calls their actions ‘terrorism’ but the video only shows tackling of some people who were resisting or flailing their arms. No beating is evident, even while one man swings his arms at police. One woman is dragged from the sidewalk to the center of a street.

In the video, one police officer has his lower leg on the shoulder blades of a man who was prone on the street after he was taken down. The woman operating the camera tells the police officer to get off of his neck, and that the prone man can’t breathe. But the man is also shown lifting his head and rotating his head side-to-side freely. The police officer’s hold was released as soon as the arrested man was restrained with plastic ties.

While the video shows a moderately intense encounter between protesters blocking the street and police, the female camera operator appears to taunt and bait the police as she is criticizing their ‘violence’. But police don’t take the bait.

The crowd and the camera operator chants “Who are you protecting” and “Shame. Shame. Shame.” A male shouts for an officer’s badge number several times.

An officer wearing an NYPD TARU shirt also videotapes the incidents at the intersection. TARU is the Technical Assistance Response Unit of the New York City Police Department. The unit provides investigative technical equipment and tactical support to all bureaus within NYPD and other city, state and federal level agencies.

New York City Police Commissioner Ray Kelly said the department is conducting its own investigation into use of pepper spray during the “Occupy Wall Street” protest against Wall Street near Union Square last week.

Kelly described the protesters’ behavior on Saturday, September 24, 2011 as “tumultuous.” He said that protesters marching near Union Square Park “were intent on blocking traffic.”

The commissioner also said the Civilian Complaint Review Board received about 150 complaints per day about the pepper-spray incident. The complaints will be investigated and recommendations will follow.

The YouTube videographer/uploader “TheOther99Percent” comments in the publisher’s notes section on YouTube, “But be advised, this will not be televised…” The video has been shown multiple times on Fox News and CNN.

Regarding the video above: The “original slow motion video analysis of NYPD mace deployment” near Union Square on September 24, 2011 shows the pepper spray deployment more clearly.

The same officer is reported by “TheOther99Percent” to be involved in a second incident involving the use of pepper spray on the same day Saturday, September 24, 2011. The video appears to be a clip from the top video of this article, which shows the same scene at 03:57-4:00. 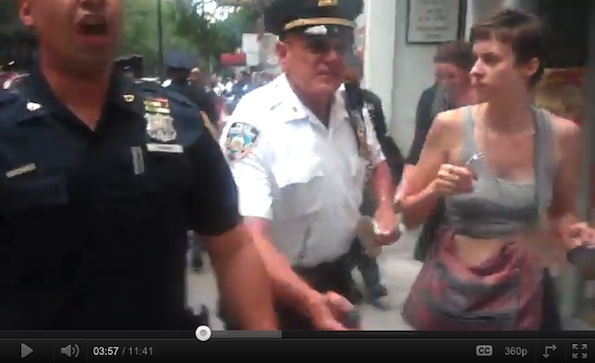 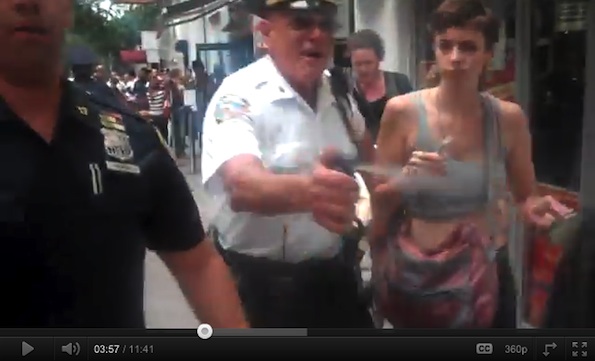 NYPD has so far responded that the use of pepper spray effectively restored order without any escalation of force or serious injury to any protester or police officer. From the video available, it’s impossible to determine whether the use of the spray was justified or not.