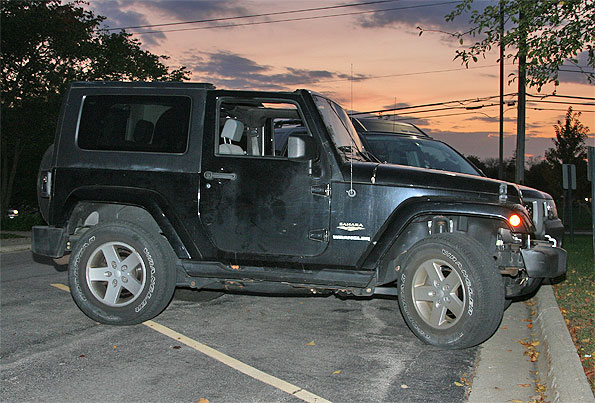 Offenders ran for their Jeep Wrangler, but witnesses said that one suspect headed inside Orchard Evangelical Free Church, and one suspect ran to Douglas Avenue and Olive Street. Each of the suspects were caught by an off-duty police detective and a soccer coach after shooting people with slingshots.

Arlington Heights police responded about 5:44 p.m. Tuesday to a report of unlawful use of weapon at the corner of Douglas Avenue and Olive Street. Police received a report that an off-duty police officer from another northwest suburb had a juvenile in custody that was shooting a slingshot at people on a soccer field. Three minutes later police received a report from a soccer coach that juveniles were shooting a slingshot at people at a Thomas Middle School soccer field. Three people were hit by shots that were launched across Belmont Avenue from Green Slopes Park to the northeast Thomas Middle School field, where a soccer practice was being held. A coach and two children were hit by the projectiles, which turned out to be marble-size shots. The coach was able to detain a second juvenile near Green Slopes park.

Teen witnesses at the scene said they saw an adult male and a juvenile male placed in handcuffs before they were transported away from the area. The teens also reported that before the offenders began shooting the slingshots, they got out of a Jeep Wrangler that was parked at Orchard Evangelical Free Church parking lot next to Green Slopes Park. The Jeep Wrangler Sahara remained at the scene Tuesday night.