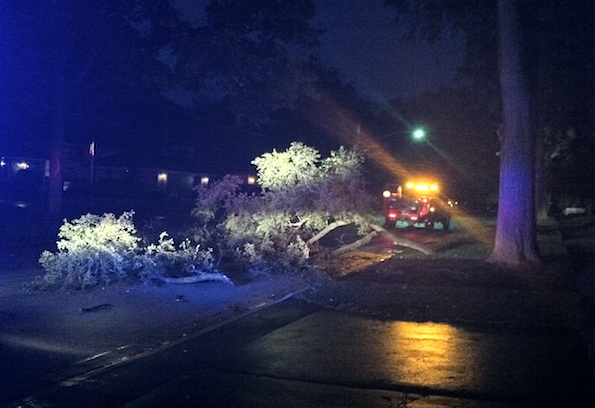 Tree branch down across one-half of Douglas Avenue between Oakton Street and Olive Street.

High winds hit ahead of a quick line of thunderstorms that weakened as it approached Arlington Heights and passed about 6:30 p.m. Wind gusts have caused problems with railroad gates and traffic signals.

A power line was reported down with the line down across Wing Street — reported at 5:45 p.m. from the 215 West Miner building.

About 5:53 p.m. a power line also went down near a detached garage in the 900 block of North Highland Avenue. Firefighters reported that a branch was smoldering and a line had fallen on the garage and across the road.

A tree was also reported down in the 1100 block of North Douglas Avenue about 6:53 p.m.

Electrical lines sparking and humming in the back near the electric service drop to IHOP, 31 East Golf Road.

Large tree branch reported about 7:05 am. Friday, across the entire road in the 900 block of South Evergreen Avenue.

Thursday night, a railroad gate malfunction was also reported at Plum Grove Road in Palatine. Palatine has also had trouble with railroad gates at Brockway.

Power reported out just west of Route 83 and north and south of Euclid Avenue.

A National Weather Service Wind Advisory was issued for 2 PM Thursday through 5 AM Friday.