Jim Cantore reports from Tuscaloosa, AL after a violent tornado struck the city on April 27, 2011.

Jim Cantore reports from the devastation in Tuscaloosa, Alabama with an overturned and destroyed UPS truck after a violent tornado struck the city on April 27, 2011.

213 Deaths reported as of 11:00 a.m. CDT in Mississippi, Alabama, Georgia, Tennessee and Virginia.

In Tuscaloosa, a city of more than 83,000 and home to the University of Alabama, a massive tornado, barreled through late Wednesday afternoon, leveling the city.

ALABAMA
15 people reported killed in Tuscaloosa, Alabama where a mile-wide tornado traveled from southwest to northwest. Massive damage to 15th Street and McFarland Boulevard. A CVS is reported destroyed at MacFarland and 15th Street — apartment buildings and other businesses also destroyed nearby. Some of the same communities were hit by tornados on April 15, 2011.

Large violent tornado in Tuscaloosa, Alabama on April 27, 2011 as it was displayed live on ABC 33/40 with James Spann.

BAILEYTON, ALABAMA
TORNADO ON THE GROUND

HAMILTON, ALABAMA
TORNADO REPORTED ON THE GROUND JUST WEST OF THE MARION COUNTY AIRPORT IN HAMILTON

HULACO, ALABAMA
TORNADO ON THE GROUND … STRUCTURAL DAMAGE ON HWY 67

TUSCALOOSA, ALABAMA
TORNADO ON THE GROUND ALONG HWY 82 NEAR THE MCFARLAND MALL. (BMX) 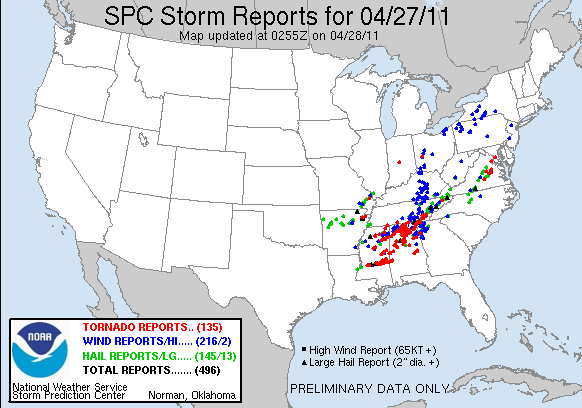