At least three people were killed Thursday when the pickup truck they were in went off of a snow-covered interstate bridge and plunged 80 feet into the icy Spring River below. Miami, Okla. police say 8 people were in the truck.

Miami (Oklahoma) Fire Department responded about 6:20 a.m. Thursday to report of a vehicle over the Will Rogers Turnpike (I-44) bridge and into the Spring River.

The vehicle in the crash appears to be a Chevrolet Avalanche Z-71 with the letters ENRIQUE at the top of the windshield.

Eight victims transported to the hospital with three reported dead. 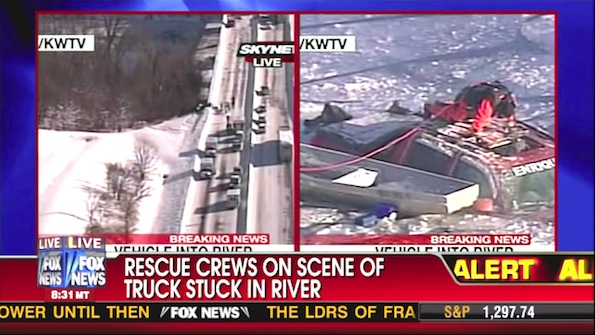 Fox News live shot of scene of a truck floating in the Spring River with rescue work (FOX NEWS — foxnews.com)