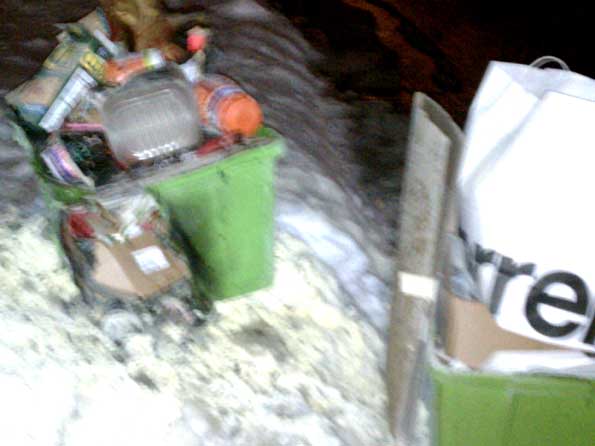 Cell phone picture after fireworks ignited contents of a recycling bin in the 600 block of South Belmont Avenue.

Arlington Heights police responded about 11:45 PM Thursday to a report of shots fired in the 600 block of South Burton or West of the location. Police received a report of six total shots that came from the west. Police arrived and found a recycling bin on fire in the 600 block of South Belmont Avenue. Apparently firecrackers were used to ignite a recycling bin that was at the curb. Police extinguished the fire.

Police also received a report of shots fired from the 300 block of East Rockwell Street. The report also stated that three shots came from a green Chevy Suburban parked at the street.

Police caught up with the Suburban and determined that the occupants were not involved.

Police also received a couch on fire at the end of the driveway in the 700 block of East Lynden Lane. Firefighters also responded to both calls. Arlington Heights police are investigating.