The pollution in Beijing was so heavy Friday that the U.S. Embassy called the air quality “crazy bad.” 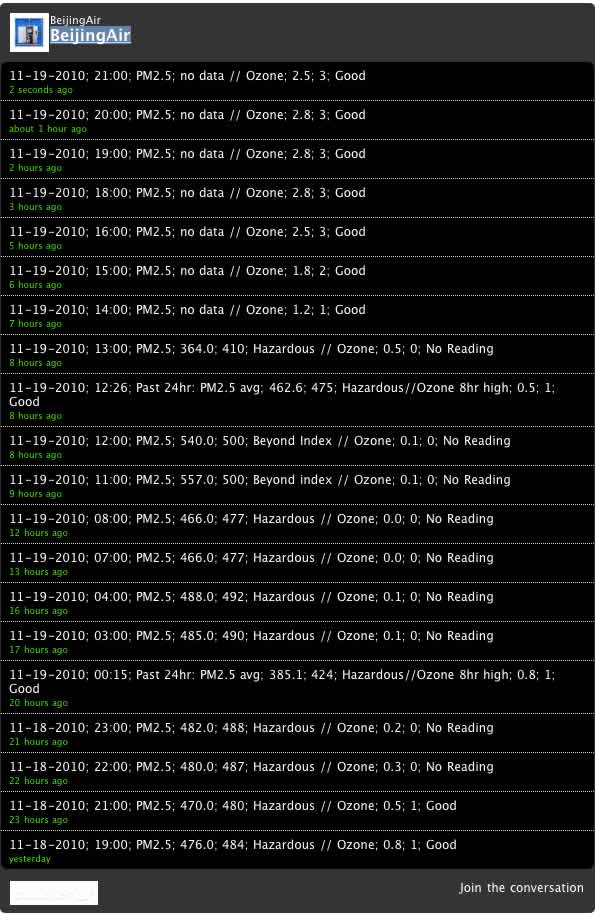 Twitter posts showing Air Quality Index with values in from 462 to 500. Captured about 7:00 a.m. CST … Current table below.

The Air Quality Index (AQI) (also known as the Air Pollution Index (API) or Pollutant Standard Index (PSI) is a number used by government agencies to characterize the quality of the air at a given location. As the AQI increases, an increasingly large percentage of the population is likely to experience increasingly severe adverse health effects. To compute the AQI requires an air pollutant concentration from a monitor or model. The function used to convert from air pollutant concentration to AQI varies by pollutant, and is different in different countries. Air quality index values are divided into ranges, and each range is assigned a descriptor and a color code. Standardized public health advisories are associated with each AQI range. An agency might also encourage members of the public to take public transportation or work from home when AQI levels are high.

According to the U.S. Embassy taking independent readings of air quality in Beijing, China; the air quality is so bad that employees called the readings ‘Crazy Bad’ but then deleted the phrase and is reportedly working on a more professional phrase for the extremely high reading.

The air pollution and haze forced schools to stop outdoor exercise and brought warnings for residents with respiratory problems to stay inside. Some healthy individuals reported breathing discomfort and chest pain as a result of breathing the air.

LIVE FEED:
Below is the feed showing the most recent tweets of air quality readings from twitter.com/AirBeijing …