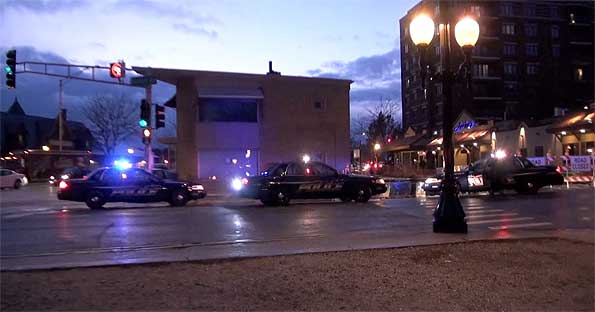 POLICE ACTIVITY at downtown rush hour: Arlington Heights police responded about 5:50 PM Thursday to a battery in progress at the intersection of Dunton and Northwest Highway. A witness saw a man beating a woman at the northwest corner of Northwest Highway and Dunton. A second male was also involved. Witnesses said they saw clumps of hair pulled out of one of the people fighting.

A female was wearing a light blue coat and was reported to be pinned down on the sidewalk by a male with both swinging at each other. One of the males was wearing a plaid shirt and the other was described as a white/male with long dreadlocks.

Police arrived in less than five minutes. The first officer on the scene drew his gun, as the three people did not stop fighting when the police officer arrived. Some units coming from the south were blocked by a train at the Metra station. Backups arrived and the situation was secured immediately. At least two males were transported in custody to Arlington Heights police headquarters. The woman was also transported to police headquarters, but not in custody.

Paramedics responded to police headquarters to check on injuries. The incident may have begun as a disturbance at the train station. Several commuter pedestrians witnessed the battery and disturbance.

Arlington Heights police are investigating, and are treating the case as a simple battery.