Arlington Heights firefighter/paramedics responded about 8:20 p.m. Thursday to a six-vehicle crash in the eastbound lanes of Interstate 90, just east of Arlington Heights Road. Illinois State Police and IDOT also responded. One of the vehicles started on fire while firefighters were on the scene, and was quickly extinguished with a pump can. Two people were transported to Northwest Community Hospital. Elk Grove Township Fire Department firefighter/paramedics responded and staged on Arlington Heights Road under the I-90 bridge. They stayed off Interstate 90 and were not needed for transport. 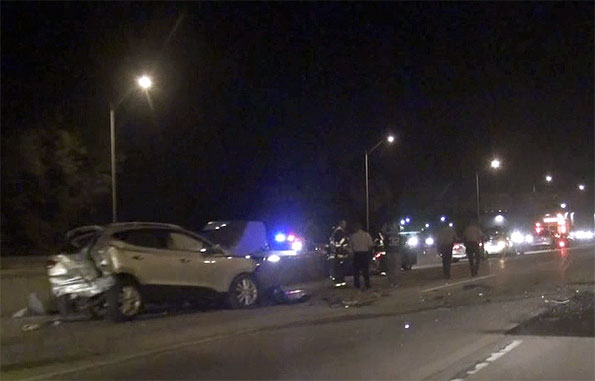 SUV with the most damage at the crash on I-90 Thursday night.

One eastbound lane was kept open while the center lanes were blocked by the accident and by emergency vehicles to buffer the accident scene. Eastbound traffic was backed up for about an hour.