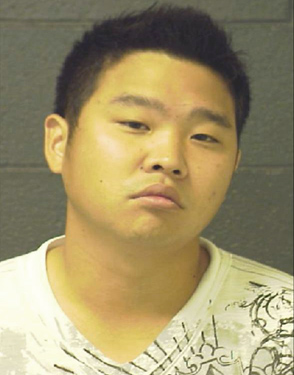 Stanford Kim, 29, a male Asian, was charged with manufacture or delivery of more than 5,000 grams (11 pounds) of cannabis, production of 50 to 200 cannabis plants, and misdemeanor possession of two firearms. More than 100 marijuana plants, one large bag of crushed marijuana and a box filled with food storage bags of marijuana were found at Stanford Kim’s residence in the 100 block of South Rammer. Street value of the maijuana was valued at more then $300,000.

Police conducted an operation with arrests last night and early this morning along Kensington Road and on Rammer, just south of Kensington Road. A felony traffic stop of a black Lexus occurred just after 3:15 a.m. at Kensington and Windsor. A man and a woman were taken in custody and transported to a residence on Rammer.

Police part of the operation also stopped a car in front of Prospect High School on Kensington Road and possibly one other car overnight. Other people may have been detained or arrested, but details are available. About 6:15 a.m. Wednesday one adult male was transported in custody to Arlington Heights police headquarters. Unknown if other subjects were released or taken in custody as well.

On Thursday, July 15, 2010 a home invasion occurred the next street over and about two blocks north in the 100 block of North Donald Avenue. An armed man asked the resident to turn over drugs and guns with two other offender at his side. The offenders were a male/white, a male/Hispanic and a female/Hispanic.