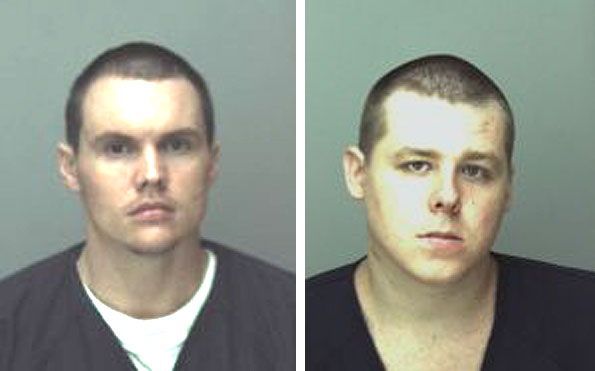 UPDATE: Inmates captured in Putnam County Saturday night. For some reason they returned to Florida and were captured after a telephone call was traced.

UPDATE: A woman in Kentucky is saying she is absolutely certain the two asked her for directions in Kentucky. The woman says at least three men were riding in a black, late model two-door Honda or Toyota Thursday afternoon. They asked for directions to Eminence, Kentucky and also mentioned Indiana. Police are still on the lookout for a red 2003 Oldsmobile Alero stolen from Monroe County.

An off-duty Clay County deputy sheriff spotted Googe’s car in Jacksonville early Wednesday morning before it was known to be involved in the inmate’s escape. He simply thought it was unusual for two young men to be using that model car, so he took note of the car. The Clay County deputy sheriff ran a routine license plate check on the Lincoln Town Car and recognized Googe’s name and her relationship with the escaped inmate, Fletcher. He contacted the Putnam County deputies, which led them to a more thorough second check of Googe’s home where they found her dead. Florida Department of Law Enforcement (FLDE) so far is calling her death a “suspicious death.”

A 2003 4-door Oldsmobile Alero with Kentucky license plate HPY-796 has also been stolen, and is believed to have been taken by Doni Ray Brown and Timothy Wayne Fletcher. The direction of travel of these two fugitives is unknown at this time but there is speculation that a relative in Indiana could be a target of the two escaped inmates.

The two individuals are considered armed and dangerous.

Brown was arrested Aug. 17 charged with robbery with a firearm. Fletcher was arrested March 3 on three counts of failure to appear on an aggravated assault charge.