The Eagles had a very personal touch at their concert at the Sears Centre Arena Thursday night with no opening act … it was just an intimate crowd with some of the finest musicians to ever walk the planet: Glenn Frey – vocals, guitars, keyboards, synthesizers, harmonica; Don Henley – vocals, drums, percussion, guitar, synthesizer; Joe Walsh – guitars, vocals, keyboards, synthesizers; Timothy B. Schmit – bass, vocals; and an excellent group of supporting musicians that unfortunately aren’t credited on their official website, but were introduced at the show. The concert kicked off with four of their newer songs, from 2008’s Long Road Out Of Eden with excellent stage graphics that reminds you of a giant crystal ball behind center stage and two side stage video screens for closeup shots and crowd shots. An early song began with an awesome trumpet solo opening which led into the first old school hit of the of the night, “Hotel California,” as the center arched video screen showed an image of the iconic album cover and similar scenes. 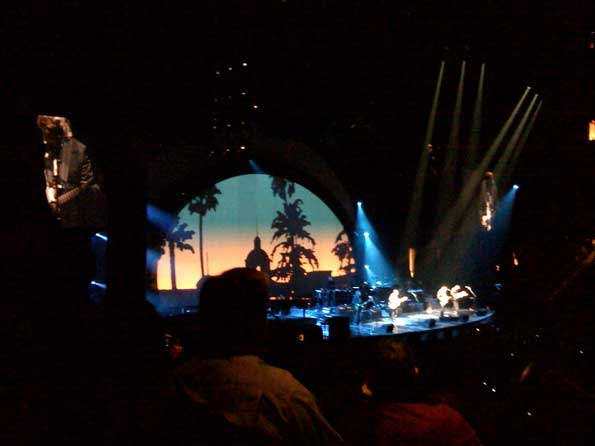 No cameras were allowed, but a fan sent us this cell phone picture from the Hotel California set at Thursday night’s concert.

Glenn Frey was the emcee for the night, and he is funny. Glenn Frey dedicated “Lyin’ Eyes” to his ex-wife … “I want to dedicate this song to my first wife — ‘Plaintiff,'” he smirked to a roar of laughter. Later he introduced a song the band member’s wives call “The Credit Card Song” … “Take it to the Limit.” Frey opened the concert with this welcoming introduction: “Welcome to The Assisted Living Tour … The Band that Wouldn’t Die.” Frey introduced Joe Walsh as a man “known by law enforcement and hotel staff across the land.” He also jokes that one of the band’s favorite television programs is the Weather Channel … great for times when they’ve “had enough of CNN.”

All of the band members were personable. Timothy B. Schmit thanked the crowd for coming out on a school night. Joe Walsh did a funny “How you doin’?” schtick. He also wears a “Helmet Cam” during “Life’s Been Good” panning to the crowd and panning left and right to other band members on stage. Joe Walsh’s guitar playing is the best. Don Henley is a class act and his voice is stellar … perhaps better than ever. All of the members play multiple instruments and they play them flawlessly.

The Band seems very aware of today’s culture and makes an emotional statement with the song Long Road Out of Eden — a soldier in the Mideast conflict pondering “What are we doing here?” … “can’t tell right from wrong.” The center stage shows images of the Mideast and compares to fun times and “cultural junk” in America. The soldier thinks about the road to an empire that is “a bloody stupid waste.” 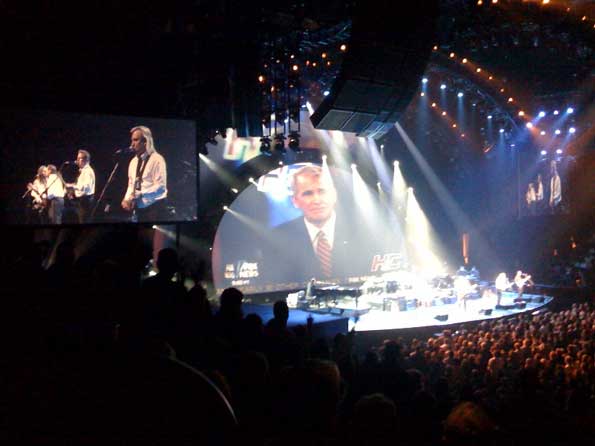 Oliver North in an image from FOXNews on the stage at the Eagles Tour during the performance of “Dirty Laundry.” (No cameras were allowed, but a fan sent us this cell phone pic).

The Sears Centre Arena is an awesome venue with great seats and a cozy, comfortable atmosphere with good food in the outer areas. Very tempting aroma from the kitchens and vendors. The staff are very personable and friendly from the parking crew, to the Hoffman Estates Police Department, to Monterrey Security, to the Sears Centre Arena staff and to the Janitor King staff on hand. A perfect ambiance was enjoyed by many. [This review was not influenced (;-)) by the fact that a parking glitch was corrected for our group — resolved to a parking space right at the curb of a north door entrance — right next to the Eagle’s luxury tour buses. So that’s what “Rock Star parking” is!]

See upcoming tour dates on the Eagles official site and Myspace.com/eaglesmusic …Only two more tour locations are in the United States: Kansas City, Missouri and Columbus Ohio. The rest are overseas.

Eagles Tour locations prior to the Sears Centre Arena concert …