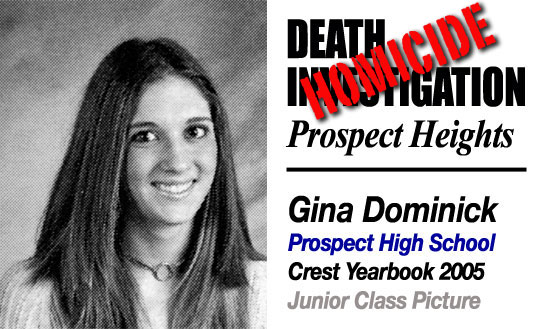 View Larger Map of area of homicide investigation near the Prospect Heights Public Library following the death of Gina Dominick from a heroin overdose.
SECOND MAN ARRESTED RELATED TO GINA DOMINICK HOMICIDE
THU SEP 11 2008 — Andrew Hall was arrested Tuesday night in Chandler, Arizona on a warrant charging him with drug-induced homicide. Andrew Hall had been interviewed by police soon after Gina Dominick’s death in June, and admitted to selling heroin. After toxicology reports confirmed Gina Domick’s death was drug induced, Hall was first held after his arrest in Maricopa County jail in Arizona.

UPDATE SEPTEMBER 08 2008HOMICIDE INVESTIGATION
Prospect Heights police have arrested Thomas Young of 103 Prospect Court, Prospect Heights and charged him with concealing a homicide in connection with the June 29 heroin overdose and death of Gina Dominick. Thomas Young turned himself in today, Monday, September 8, 2008 at 10 a.m. and appeared in bond court later during the day. His bond was set at $50,000 and his next court appearance is October 10, 2008 at 1:30 p.m.

Police are still searching for a second man who supplied the heroin.

Evidence obtained from security system surveillance video and from phone calls and text messages between Thomas Young, 21, and Gina Dominick, 20, led police to Thomas Young, who has admitted that Gina Dominick died in his house before he moved her body one block from his house to the location where her body was found in her Honda Accord in the parking lot of the Prospect Heights Public Library. The two were using heroin* and were planning to get in a hot tub, but Gina Dominick died in an adjacent bedroom (The Des Plaines Journal (9/10/2008) is reporting that Police Chief Bruce Morris said that Young did not indicate that he was using heroin). Thomas Young had to carry her body down a flight of stairs before he put her body in the passenger seat of her Honda and drove her car to the library parking lot. He then left the car and the body. Young and Dominick dated and attended a few parties together before the night of her death.

Gina Dominick, 20, of the 200 block of North Emerson Street in Mount Prospect was found dead in a car behind the Prospect Heights Public Library (12 North Elm Street) near Camp McDonald Road in Prospect Heights about 10:30 a.m. Sunday June 29, 2008.
Following is the original information as the investigation proceeded …

SUN JUN 29 2008 NEWS: The Major Case Assistance Team is assisting Prospect Heights Police Department with the investigation and an autopsy is scheduled for today.

SUN JUN 29 2008 10:30 pm UPDATE: Preliminary autopsy observations noted lacerations and bruises on Gina Dominick’s body, according to a report from The Journal & Topics Newspapers (Prospect Heights Edition, July 2, 2008). The Cook County Medical Examiner’s Office has been communicating with the police, who believe that a male was seen by witnesses driving her car earlier Sunday morning.

TUE JUL 01 2008 1:45 PM UPDATE —  The Prospect Heights Public Library does have outdoor security video cameras that were recently installed. There is reasonable assumption that a camera was fixed on the location where the car and body were found, but no information is known about the clarity of the video image. The police have not put out a public call for help in identifying a person in an image nor have they released any images. The police also have not released any official statement regarding a person of interest.

TUE JUL 01 2008 7:15 PM UPDATE — No recent official statement from police regarding the investigation of the death of Gina Dominick since Sunday; however, according to friends and acquaintances of Gina Dominick, an adult male person of interest is in police custody. A large number of friends have been interviewed — many of the people interviewed were identified from pictures found on Gina’s digital camera or cell phone. All of those interviewed have been released, except for one person.

WED JUL 02 2008 5:00 AM UPDATE — Daily Herald is reporting (Girl found dead in Prospect Hts. sought ride after car was towed, 7/1/2008 7:11 PM | Updated: 7/2/2008 12:45 AM) that a friend of Gina Dominick, Jessica Schatz, received a cell phone call from Gina at 12:30 a.m. Sunday asking for a ride from a Schaumburg bar since her car was towed and her money was in her car. Schatz was without a car, but tried to arrange transportation. When Schatz called Dominick back, Gina said she was with a girlfriend, that she had a ride and was waiting for a guy to arrive from Chicago and take them to the auto pound. That was the last communication Jessica Schatz had with Gina Dominick.

TUE JUL 08 2008 1:30 PM UPDATE — The word on the street (unsubstantiated) is that the police do have a male adult in custody. However, the report that a search warrant was issued at 103 Prospect Court does not confirm that the “person of interest” is related to that search warrant. While a person of interest could be related to that address, it is possible that police wanted to obtain security video from that house, if it existed, and especially if a camera from that home security system (if it exists) was pointed at the Prospect Heights Public Library parking lot. The home is about 200 feet north of the Prospect Heights Public Library. Police did request security video from other home security systems in the area. No image has been released to the media.

* The Chicago Tribune: Man is charged with concealing woman’s drug-overdose death
By Mark Shuman and Carolyn Rusin | Special to the Chicago Tribune
7:26 PM CDT, September 8, 2008 … “Authorities said Dominick picked up Young at a party in Wheeling on June 28 and drove him to another suburb, where he bought heroin while she waited in the car. The two then went to Young’s house and used heroin, along with another person, authorities said.”

The Chicago Trubune deleted the following sentence from the September 08 2008 article:
“He said the two had intended to use heroin and sit in a hot tub in Young’s home.”