A fully-grown cougar was shot around 5:30 p.m. Monday near 3422 North Hoyne in the Roscoe Village neighborhood of Chicago. The cougar was able to flee about 100 to 150 feet before collapsing and dying in an open space between garages in a back alley between the parallel streets of Hoyne and Hamilton. The cougar, shot in a multitude of about 15 to 18 rounds of Chicago Police Department gunfire, weighed 122 pounds and was five feet long, not including the animal’s tail.

Roscoe Village neighborhood residents were ordered in their homes while Chicago police chased the mountain lion with guns drawn. Animal control officers with tranquilizer guns had been called earlier in the day when the cougar was first sighted by Rosa Lobato, but the tranquilizers were not available when police officers were confronted with an agitated large cat later in the day. The cougar, roaming a neighborhood near a grade school (Audubon Elementary School), was able to leap six-foot fences during the chase and in one video image is seen sneaking behind a Chicago police officer walking in an opposite direction.

Neighbor Dana Dinello at first thought the cougar was a dog “trotting through” because of its size. Michael Bauknecht was one of the first to call 9-1-1 during the evening sighting. Rich Cebulak also witnessed the cougar and thought it was a dog at first running out from under his porch, but then realized he was seeing ‘a lion.’

A cougar was also reported in Wilmette recently near a CTA transit station April 12 and in North Chicago March 27th. 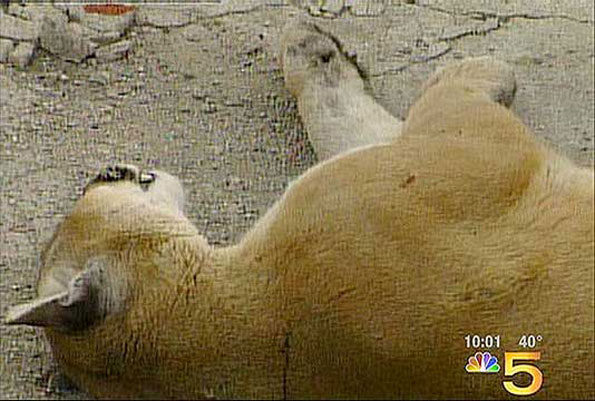 Chicago cougar story was the top news story on the local news and carried on network news. Unfortunately for the cougar, there were were no tranquilizer guns immediately available.

Cougars are native to America having the greatest range of any wild land animal in the Western Hemisphere. Cougars are stalk and ambush predators. A report in the journal Wilderness and Environmental Medicine reports details of a nonfatal cougar attack of an eight-year-old, 65-pound girl in British Columbia in July 2002. A two-year-old male cougar silently pounced on the girl who was bending over on the beach to look at a hermit crab. The cougar jumped out after hiding beyond the edge of a nearby forest. The 100-pound cat attacked the girl’s neck in the instinctual style of lion predators, sinking its teeth into the posterior aspect of the girl’s neck and carrying her down the beach for about 20 seconds while she did not respond and her body went limp. A group of adults chased and screamed at the attacking cougar and threw stones. The girl’s father approached the cougar as it tried to re-enter the forest “bellowing” loudly with his hands waving over his head. The cougar reversed his direction at first, but then dropped the girl and climbed a tree.

A family physician was part of the group of adults and quickly treated the stricken girl. He found nine puncture wounds to the posterior skull, upper arm, posterior and lateral neck and upper back. There were also scratch marks on her face and back.

The girls lost about 200 ml of blood, but on first impression had no major neck blood vessel damage, no spine fractures and no puncture lungs. At the hospital all serious injuries were ruled out and the only serious damage was a small region of severed trapezius muscle that was removed, and psychological trauma.

The cougar was shot and killed in British Columbia and its head was sent to a lab where a rabies test was negative.

Get the full news stories from the following Chicago television news stations and newspapers: