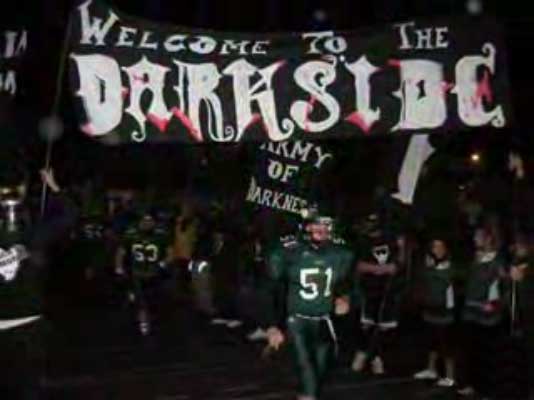 Fremd High School “Welcome to the Darkside” and “Army of Darkness” banners (still frame from YouTube post below).

YouTube post of a tribute to Fremd fans shows Fremd “Army of Darkness” black spirit attire that includes clips from Glenbard North game. No video of the post-game aftermath.

Tension between the two high schools was increased after Fremd students posted an “Army of Darkness” YouTube video and blog that touted that the only reason Glenbard North High School would draw a crowd would be to honor their band director that recently died. William R. Schraft, 50, the music department chairman and band director at Glenbard North High School died Wednesday, October 31, at the University of Chicago Hospital of complications during his one-year battle with cancer. A large number of Fremd High School fans wear black to be a part of the “Army of Darkness” to show off school spirit. There were also references to invading Glenbard’s stadium. Fremd High School is a public high school in District 21 located in Palatine, Illinois [MAP/SAT].

Carol Stream Police Department made no arrests and no charges were filed against any students or adults. Apparently there was difficulty identifying specific offenders.