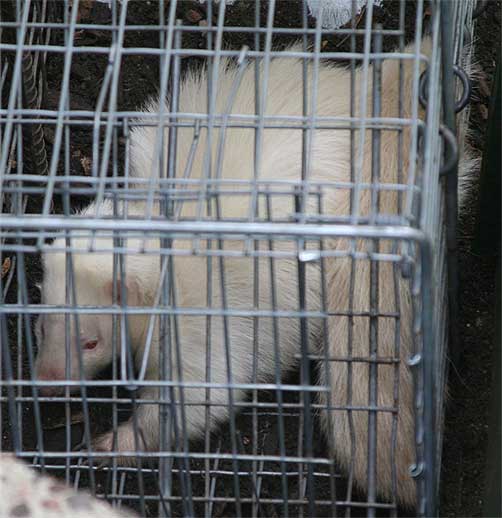 Albino skunk after being trapped in May 2007 near a porch where it had excavated a home underneath.

An albino skunk was trapped and removed in late May from a residence in Arlington Heights, Illinois.

Skunks are mammals, usually with black-and-white fur, belonging to the family Mephitidae and to the order Carnivora. Occasionally, albino skunks — all white skunks with pink eyes — are found. There are 11 species of skunks, which are divided into four genera: Mephitis (hooded and striped skunks, two species), Spilogale (spotted skunks, two species), Mydaus (stink badgers, two species), and Conepatus (hog-nosed skunks, five species). The two skunk species in the Mydaus genus inhabit Indonesia and the Philippines; all other skunks inhabit the Americas from Canada to central South America.

Skunks were formerly considered to be a subfamily of the Mustelidae family of weasels and related animals (where some taxonomists still place them), but recent genetic evidence shows that they are not as closely related to the Mustelidae as formerly thought.

Skunks are sometimes called polecats because of their visual similarity to the European polecat (Mustela putorius), a member of the Mustelidae family.

Skunk species vary in size from about 15.6 in. (40 cm) to 27 in. (70 cm) and in weight from about 1.1 lb. (0.5 kg) (the spotted skunks) to 10 lb. (4.5 kg) (the hog-nosed skunks) They have a moderately elongated body with reasonably short, well-muscled legs, and long front claws for digging.
Although the most common fur color is black and white, some skunks are brown or gray, and a few are cream-colored. All skunks are striped, even from birth. They may have a single thick stripe across back and tail, two thinner stripes, or a series of white spots and broken stripes (in the case of the spotted skunk). Some also have stripes on their legs.
Anal Scent Glands
The best-known, most distinctive, and often most notorious feature of the skunks is the great development of their anal scent glands, which they can use as a defensive weapon. It is similar to, though much more developed than, the glands found in species of the Mustelidae family. Skunks have two glands, on either side of the anus, that produce a mixture of sulfur-containing chemicals (methyl and butyl thiols) that has a highly offensive smell that most people describe as a combination of the odors of rotten eggs, garlic and burnt rubber. The odor of the fluid is strong enough to ward off bears and other potential attackers, and can be difficult to remove from clothing. Muscles located next to the scent glands allow them to spray with high accuracy as far as 2 to 3 meters (7 to 10 ft). The smell aside, the spray can cause irritation and even temporary blindness, and is sufficiently powerful to be detected by even an insensitive human nose anywhere up to a mile downwind. 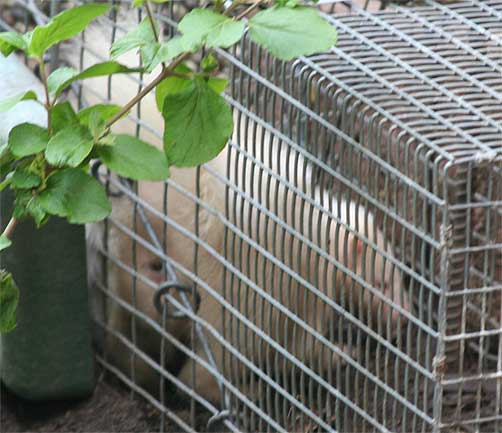 Skunks are reluctant to use their smelly weapon, as they carry just enough of the chemical for five or six uses—about 15 ml —and require some ten days to produce another supply. Their bold black and white coloring however serves to make the skunk’s appearance memorable. Where practical, it is to a skunk’s advantage to simply warn a threatening creature off without expending scent: the black and white warning color aside, threatened skunks will go through an elaborate routine of hisses and foot stamping and tail-high threat postures before resorting to the spray. Interestingly, skunks will not spray other skunks (with the exception of males in the mating season); though they fight over den space in autumn, they do so with tooth and claw.

The singular musk-spraying ability of the skunk has not escaped the attention of biologists: the names of the family and the most common genus (Mephitidae, Mephitis) mean “stench”, and Spilogale putorius means “stinking spotted weasel”. The word skunk is a corruption of an Abenaki name for them, segongw or segonku, which means “one who squirts” in the Algonquian dialect.

Most predatory animals of the Americas, such as wolves, foxes and badgers, seldom attack skunks—presumably out of fear of being sprayed. The exception is the great horned owl, the animal’s only serious predator, which, like most birds, has a poor-to-nonexistent sense of smell.
Skunk spray is composed mainly of low molecular weight thiol compounds, namely (E)-2-butene-1-thiol, 3-methyl-1-butanethiol and (E)-2-butenyl thioacetat, these compounds are detectable at concentrations of  about 2 parts per million.

Removing the scent from objects or creatures can be difficult. Some home remedies suggest using tomato juice or vinegar. A more complex and effective remedy includes application of a mixture containing hydrogen peroxide, baking soda, and liquid soap.[5] The thiols, which are responsible for the odor, are not water soluble, even with soap, but the baking soda catalyzes the oxidative ability of the peroxide, which oxidizes the thiols into highly water-soluble thiolates. In an episode of the television program MythBusters, the hydrogen peroxide mix was found to be the most effective smell removal agent.

From Popular Science Aug. 1995, chemist Paul Krebaum provided the recipe for the bathing concoction. One quart of 3 percent hydrogen peroxide, one quarter cup of baking soda, and one teaspoon of liquid soap. Bath your pet in this solution and rinse with tap-water. Krebaum warned that there is no way to store this potion. “If you put the ingredients in a bottle, the whole thing would explode.”

Behavior
Skunks are crepuscular (active during twilight), and are solitary animals when not breeding, though in the colder parts of their range they may gather in communal dens for warmth. During the day they shelter in burrows that they dig with their powerful front claws, or in other man-made or natural hollows as the opportunity arises. Both sexes occupy overlapping home ranges through the greater part of the year; typically 2 to 4 km² for females, up to 20 km² for males.

Unlike the fictional “Flower” in the movie Bambi, real skunks do not hibernate in the winter. However they do remain generally inactive and feed rarely. They often overwinter in a huddle of one male and multiple (as many as twelve) females. The same winter den is often repeatedly used whether under a house or in a tree.

Although they have excellent senses of smell and hearing — vital attributes in a nocturnal omnivore — they have poor vision. They cannot see objects more than about 3 meters away with any clarity, which makes them very vulnerable to road traffic. Roughly half of all skunk deaths are caused by humans, as roadkill, or as a result of shooting and poisoning. They are short-lived animals: fewer than 10% survive for longer than three years.

Skunk Bites and Rabies
The Centers for Disease Control and Prevention recorded 2,223 cases of rabies in skunks in the United States for the year 2000 – about 31% of reported cases in all species. Skunks trail raccoons as “reservoirs” of rabies, although this varies regionally (raccoons dominate along the Atlantic coast and eastern Gulf of Mexico, skunks throughout the Midwest and down to the western Gulf, and in California). Despite this prevalence, all recorded cases of human rabies from 1990-2002 are attributed by the CDC to dogs or bats.

In case of a skunk bite, follow these directions as a precaution against rabies or other infection. (If a situation with a biting animal is out of control, call 911 emergency services immediately.) If possible without further injury, retain the skunk, dead or alive, to assess and prevent the risk of
spreading disease. If the animal is dead, place on ice or refrigerate. Wash the wound thoroughly with antibacterial soap and water. Place pressure to stop any bleeding. See your doctor or emergency medical services immediately or call 911 to request paramedics.

Ask to have it tested for rabies. Once a doctor has looked over the wound, ask if a tetanus shot is necessary or recommended (tetanus vaccinations are typically good for ten years). When the test results are finished on the skunk, you will be told if you should get the rabies vaccine or not.

In some situations where there is no biting or threat to humans, you may be advised to call your local private animal control agency to trap the skunk and remove it from your property.

Diet
Skunks are omnivorous, eating both plant and animal material but mostly meat. They eat invertebrates (insects and their larvae, found by digging, and earthworms) as well as small vertebrates (rodents, lizards, salamanders, frogs, snakes, birds, moles, and eggs). In the absence of insects or other prey, skunks eat wild fruits and large seeds. In settled areas, skunks also seek human garbage.

Skunk Reproduction
Breeding usually takes place in early spring. Female skunks are induced ovulators, which means that the male skunk mounts the female from behind and bites her on the back of the neck and back, which induces the female’s ovulation. Females excavate a den ready for between one and four young to be born in May. The male plays no part in raising the young and may even kill them. A common scene in late spring and summer is a mother skunk followed by a line of her kits. By late July or early August the young disperse. When the young skunks meet again, they raise their tails vertically. After a little posturing they start to rub against each other, often rolling around in what appears to be an embrace. Older skunks seem less friendly to the young kits.
Skunk Control
As a skunk’s odor is universally considered to be offensive, people living in areas known to be inhabited by skunks are advised to take certain precautions to prevent skunks from taking up residence where they are not wanted. As skunks commonly make their dens in wood or junk piles, it is recommended that these be kept to a minimum. Skunks are scavengers and frequently go after garbage. Garbage should be stored in tightly sealed cans.

Another common method of discouraging skunks is to use a general purpose pesticide on the grounds to reduce the occurrence of the insects upon which skunks feed. This method has its weak points though. By aiming at skunks indirectly the impact on the above mentioned grounds and their insect population is huge.

A fence extending one or two feet into the ground is sufficient to prevent skunks from making a den underneath a house or other structure. If a skunk should take up residence under the building, bags filled with mothballs or washcloths drenched with ammonia can be used to encourage skunks to leave. Securing a rope to the bag or cloth will make removal easy later on. Flour or other non-toxic white powder can be sprinkled around the den entrance to track foot prints. One should check for fresh foot prints from the skunk leading out, but not going back in. It is better to check in the morning as the skunks will be more likely to be active at night.

After all the skunks have left, one should then block up any entrances that the skunk may have used along with the entrance to the skunk’s den. If it is suspected that there are more skunks living in the den, a door should be constructed at the den’s entrance that is hinged at the top, and extends approximately six inches (15 cm) beyond the entrance. It should be placed at a right angle to the direction of travel and should not be air tight. This can be an effective technique as it allows the skunks to exit their den, but makes it difficult for them to get back in.