Video of apartment fire as the fire is declared knocked down by interior crews at 225 South Rohlwing Road in Palatine.

A second apartment fire of the day in Palatine broke out about 1:15 p.m.
Tuesday at 225 South Rohlwing Road [MAP/SAT]. Upon arrival, firefighters reported smoke showing out of fourth floor windows of the north wing of the six-story brick multi-unit apartment building. The alarm was raised to a second alarm because of heavy smoke and rescues. At least three people were transported to the hospital. One woman was reported in serious condition. 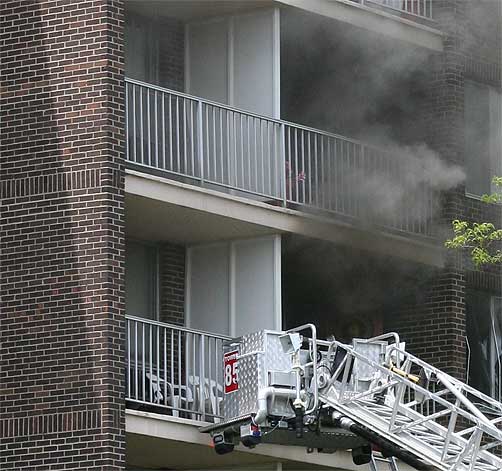 Palatine Tower Ladder 85 adjacent to a fourth floor balcony while Palatine firefighters  knock down a blaze in the apartment.

Additional firefighters were also used for overhaul. A tower ladder, a quint ladder and an extension ladder from the ground were used for access to the fourth floor.

The fire was knocked down within 15 minutes by Palatine Fire
Department.