A woman whose autopsy showed that she died in her home Wednesday of smoke inhalation and burns that covered her entire body, has been identified as Mary D. Tierney, 58, 1503 N. Windsor Drive at the Arlington Glen Condominiums.

Her daughter, a Niles resident named Mary Colleen Tierney, 26, was also found in the condo with severe burns, but survived the fire and was transported to Northwest Community Hospital and then transferred to Loyola University Medical Center by the Loyola Lifestar helicopter. She is in a drug-induced coma and has not been interviewed by police.

Arlington Heights Police were at the condo on May 2, prior to the fire to investigate a domestic violence case involving Mary and her daughter after her daughter allegedly struck her mother with a blunt object on the head and upper torso. Mary Colleen Tierney was charged with aggravated battery and unlawful restraint with bail set at $60,000. Mary Colleen Tierney was due in court May 23. 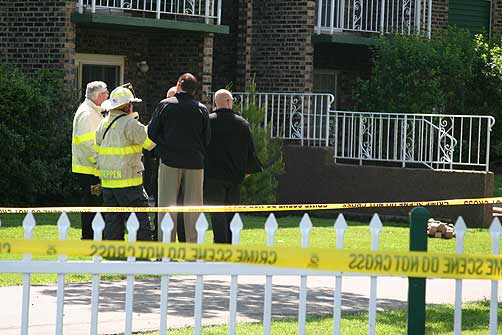 Police and fire officials meet after a fatal fire in the 1500 block of North Windsor Drive.

Arlington Heights quickly knocked down the fire in Mary D. Tierney’s multi-family condominium unit in the 1500 block of North Windsor Drive [MAP/SAT] Wednesday morning about 10:00 a.m. She was found dead and her daughter, Mary Coleen Tierney, was found alive with serious burns and was transported to Northwest Community Hospital. The fire was on the third floor of a building near Hersey High School.

An extra alarm EMS Box was requested to help with secondary searches as there were reports of a possibility of more victims.

Arlington Heights police, the Illinois State Fire Marshal and the Major Case Assistance Team are investigating. Arlington Heights Police detectives were on the scene immediately following the response to the fire.