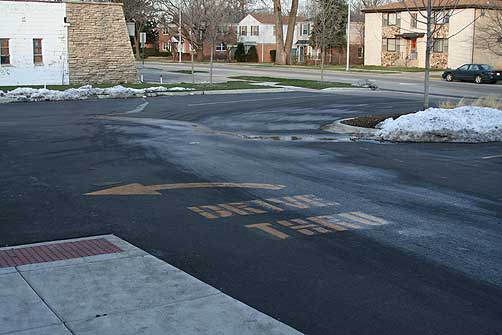 Drivers headed to the drive thru at Walgreens are directed to drive on the wrong side of the lane in the parking lot on the northeast side of Walgreens. This will cause confusion to these drivers and expose them to the risk of collisions with cars entering the entrance from Dryden, who would expect to travel south on the right side of the lane pictured (entrance drivers would be traveling from left to right in the picture). The lane in the parking lot does not follow the U.S. standard of driving on the right side of the road. Note also that if a drive-thru-bound car (drives from right to left in the picture) was passing north above the pavement markings, it would be impossible for a driver entering at the entrance to see the reversal of the lane directions. This could cause the driver entering the lot to think that the drive-thru-bound driver was on the wrong side of the lane and become angry with that driver. The confusion could also cause delays that could increase the chance of traffic congestion back-ups from the entrance in to Dryden Place. The back-ups could increase the chance of rear-end or other type of collisions near Dryden Place and the Walgreens entrance.