Arlington Heights is only about four miles from O’Hare International Airport — one of the world’s busiest airports. Therefore, a lot of aircraft fly in the skies over Arlington Heights — where the southern border is only about four miles away from the airport. When a report comes out that a strange craft hovered over one of the terminals at the busy airport, you can be sure a lot of people would like details. 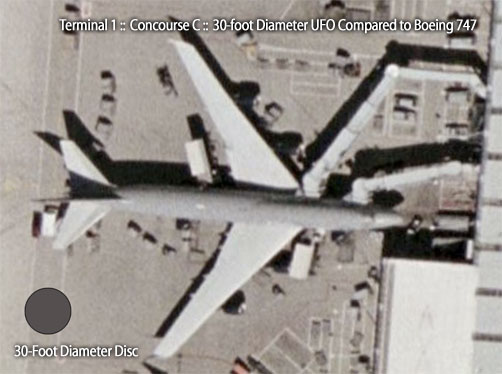 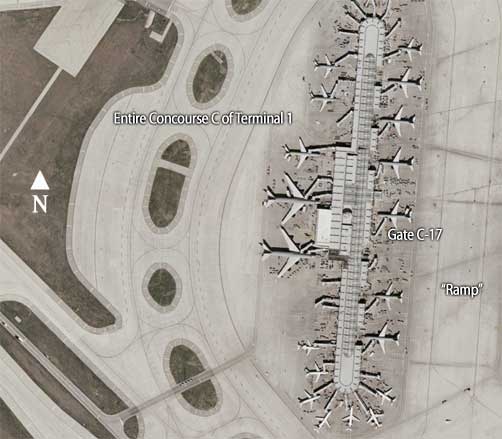 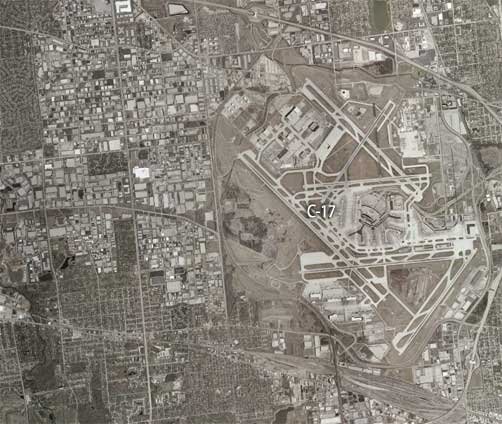 Peter Danvenport, Director of the National UFO Reporting Center (nuforc.com), was a guest host on the Jeffe Rense Radio Show (rense.com) on December 12, 2006. He brought to the airwaves a telephone interview of a witness of the November 7, 2006 UFO sighting over O’Hare International. The witness is a taxi mechanic who moves aircraft from gate to gate or to the hangars for maintenance. He reported the following.

On November 7, 2006 about 4:30 p.m. ground crew radio chatter started reporting that an object was hovering right above gate C-17.

The craft appeared to be hovering right below the ceiling of the cloud cover (about 700 or 800 feet). The cloud ceiling that day was 1900 feet. The top of the craft was clearly outlined as a very dark gray material, but the bottom and the edges of the craft were hazy like when you see the mirage-like surface of the road on a hot day. The other interesting observation was that after the craft accelerated straight up (observed by other witnesses), there was a hole punched in the clouds. The hole in the clouds was about the same size as the unidentified craft. It looked like a cookie cutter hole stamped out of dough ‘very similar in size’ to the craft. The hole stayed for a little while and then dissipated into the overcast clouds. The sighting lasted about 20 minutes from the time of the first radio call to the time when the mechanic and witness parked the Boeing 777 that he was taxiing across the airport.

No lights were observed on the craft. The craft was estimated to be about 20 or 30 feet in diameter by the witness. The craft was not reported by radar according to the witness. On the west side of the airport there is a radar that is designed to detect aircraft in the air. There is also a radar for ground traffic.

The witness stated that he believed that the guy that was working ATC (air traffic control) handling inbound ground had to have seen the UFO, but didn’t say anything. The witness said that the guys in the tower are a ‘different breed’ (not in a negative way) because of the responsibilities that they have. The witness said that ‘it’s just a shame that more people won’t talk about what they see and what they’ve experienced, rather they seem to go to the lowest common denominator of people to try to debunk — you know — what is out there. This was O’Hare … I know a lot of people saw this.”

The witness also said that “they (the tower personnel) have communications equipment in the tower at O’Hare to where they can talk to whoever they need to on the military level instantly. And they have a very special computer in there … tied in to the ability to track aerial objects.” The witness thought that the personnel in the tower may have supervision that prohibits them from reporting publicly what they saw. He hopes “more people will not be afraid to come out and say ‘hey …  you know what? I saw …’ ” The witness also said the he felt very privileged to see what he saw that day.

The person interviewed is one of the people who submitted one of the two reports published on NUFOC.org. He submitted the 11/21/2006 16:08 report on the November 7 incident.

In the radio show conclusion, the talk show hosts clarified that the location of the UFO was in Class B airspace. No craft is supposed to be there without a transponder. They speculated that this was something from another planet and if it was a military craft, why would it be flying right over O’Hare airspace?

About twelve people reported seeing the UFO, including pilots, mechanics, ramp personnel and a manager who ran out of his office in Concourse B to see the object after hearing the chatter on a United Airlines private radio frequency.

United Airlines spokespeople are denying the report. In a Chicago Tribune article by Jon Hilkevitch, Megan McCarthy was quoted saying “There’s nothing in the duty manager log, which is used to report unusual incidents.” But one United pilot says he even opened a windscreen in the cockpit to get a better view of the object as he was taxiing his aircraft. All witnesses wanted to remain anonymous and were advised by United officials to refrain from speaking about what they saw.

Nevertheless, FAA spokeswoman Elizabeth Isham Cory made the following summary statement: “Our theory on this is that it was a weather phenomenon,” she said. “That night was a perfect atmospheric condition in terms of low [cloud] ceiling and a lot of airport lights. When the lights shine up into the clouds, sometimes you can see funny things. That’s our take on it.”

Sunset at Chicago O’Hare on November 7, 2006 was 4:38 p.m. — not dark enough, even with overcast, for lights to be playing any tricks on witnesses. Winds were from the
west at about 5 to 9 miles per hour (Weather Conditions and Sunrise/Sunset Data for 11/07/2006 from Weather Underground).

The National UFO Reporting Center keeps a list of UFO sightings reported on NUFORC.org. The NUFORC.org Illinois listing has reports for the O’Hare sighting and other sightings in the area on other days.