Rudolph the Red-Nosed Reindeer, produced for television, is the famous 1964 Christmas stop-motion animated television special first aired Sunday, December 6, 1964, on the NBC television network, and was sponsored by General Electric under the umbrella title of The General Electric Fantasy Hour. Since 1972, the special has aired on CBS, with the network unveiling a high-definition, digitally remastered version of the program in 2005.

Rudolph the Red-Nosed Reindeer airs several times during the Christmas and holiday season on CBS, as do Charlie Brown Christmas and How the Grinch Stole Christmas.

However, unlike the latter holiday specials which are broadcast on several cable channels, Rudolph the Red-Nosed Reindeer is only broadcast on CBS. Rudolph has been telecast every year since 1964, making it the longest continuously running Christmas TV special in history.

The 50th anniversary of the television special was broadcast and a series of postage stamps featuring Rudolph was issued by the United States Postal Service on November 6, 2014.

The television special was based on the Johnny Marks song “Rudolph the Red-Nosed Reindeer” which was based on the poem of the same name written in 1939 by Marks’ brother-in-law, Robert L. May.

The TV special produced by Videocraft International, Ltd. (later known as Rankin/Bass Productions) and currently distributed by Universal Television. It 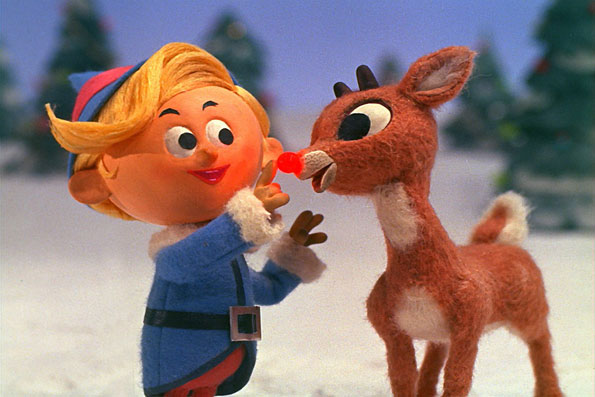 Interesting copyright situation for still images from the television special:
The copyright year in Roman numerals was mismarked as MCLXIV (1164) instead of the correct MCMLXIV (1964), which invalidates the copyright under U.S. law at the time. The law required a valid date of copyright to be affixed to the production; whicl means that still images from the special and all of the characters unique to the special are, as a result, in the public domain. However, because the original story and song are still copyrighted and the soundtrack was validly copyrighted separately, for all practical purposes, permission is still required to air the special.